The town of Barbaresco is characterized by a masonry profile of its medieval tower, the largest and most solid in the Piedmont region.

From the top, the view goes beyond the Tanaro river, situated roughly 200 meters below, towards the Langhe, the Roero, the Astigiano, Monferrato, and as far as the Alpine mountain chain.

It remained a ruin for a long time, yet after a thorough restoration it is now open to the public and is considered one of the main tourist attractions of the area.

It is highly recommended to visit the tower on a clear, bright day in order to fully enjoy the view. 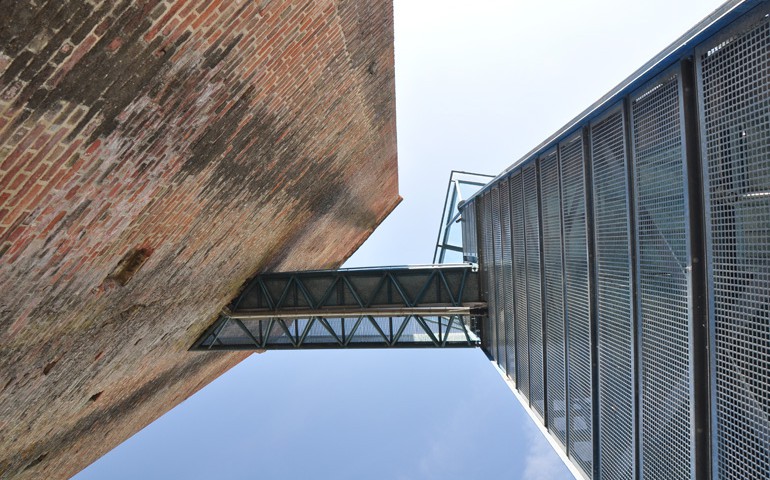 The Tower and the panoramic glass and steel walkway, 13 meters high

The tower is 36 meters high, with 9 meter sides, two openings and its only entrance is an unusual compartment located 13 meters high. It was built around the year one thousand to defend the town from the Saracens.

The construction, situated in the outer part of the town with a watchtower function, was erected on a sandstone base and made entirely of brick; it’s a direct witness of Barbaresco’s medieval past.

It was part of a more complex fortification system, of which no trace remains, and a castle. At the summit we can still see the remains of the battlements placed to form a crown.

The edifice was probably part of a system of watchtowers built along the Tanaro river and, due to its strategic position, it was disputed for some time between the towns of Alba and Asti.

According to archive documents, the fortification was obtained by the Alba municipality around the year 1198 without ever being ceded.

It is said that in ancient times it was covered by a roof which was removed in 1821 to celebrate, along with a huge bonfire at the top, the arrival of Vittorio Emanuele I at the Govone castle.

This excessive enthusiasm for the restored kingdom of Savoy, in addition to beheading it, made the tower extremely vulnerable to bad weather. 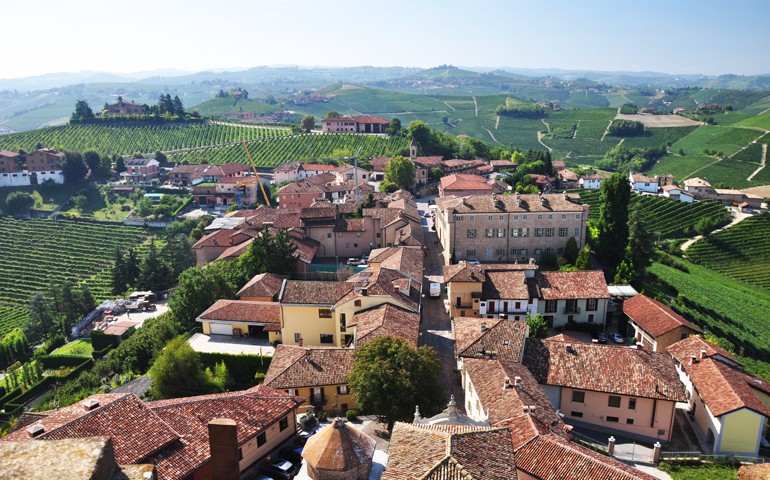 The tower’s renovation stems from the fusion between the medieval building and the modern use of glass and steel.

A panoramic elevator takes visitors 13 meters high, where a suspended scenic walkway provides access to the ticket office and then to the tower.

The choice to use crystal glass flooring is not random; it helps to reveal the interior of the tower making it easily distinguishable to see what is ancient and what is modern.

The view from above gives a view all the way down to the pit, once the last bastion for those who would have found themselves in a situation of extreme defense.

From the ticket office an elevator leads to the first level, where, via multimedia tools, visitors can learn the stories of people, places and labels that have helped make Barbaresco a wine known worldwide.

On the second level, which is lit by simple embrasures, we find the Sensory Analysis Room with three different functions: technical, education of the senses for tourists and a meeting room.

The most awaited level is surely the third. The glass lift opens to the main attraction: the panoramic terrace, where your view can embrace the surrounding hills and landscape.

The village, situated on the top of a "Rocca" (a precipitous massive cliff) along the Tanaro River, is characterized by an imposing tower from which it is possible to admire a 360 degrees landscape.

The Wednesday market in Neive