Along the Barolo roads, stands a castle that overlooks the hills: the Serralunga d’Alba Castle.

Built between 1340 and 1357, according to somewhat unusual shapes in Italy, but typical of fourteenth century French Donjon, it was one of the castles belonging to the Falletti family: merchants and bankers originating in Asti.

Over the centuries, the Falletti, represented the most important dynasty in the Langa, and obtained jurisdiction of over 50 fiefs or municipalities. Their history was interwoven with the castle’s for over 600 years.

In 1864, after the death of the last descendent, the philanthropist Giulia Falletti Colbert, the manor house became property of the Opera Pia Barolo, and was then acquired and restored by the Italian State in 1949.

Originally the building was made up of the square tower, built after the barbarian invasions, and forms part of a system of watch towers located throughout the area.

The castle itself was built later.

The visit includes three large 80 sq m overlapping halls, the last of which (where the walkway is found) offers a panoramic view of the hills and the surrounding towns. 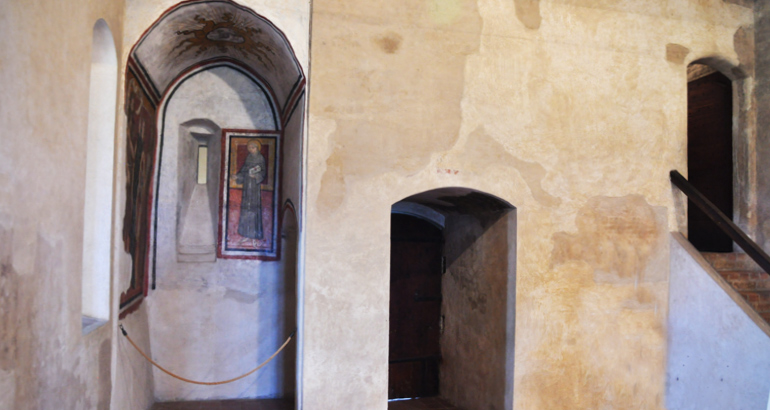 The entrance and reception rooms

It was never taken or conquered, but only occupied by Spanish troops in 1616; the main entrance of the castle was well defended by two circles of walls, a moat, a thick wooden door, the powerful drawbridge and grating, also designed to protect the water tank located under the small internal courtyard

The Salone dei Valvassori is the castle’s main room, characterized by the coffer ceiling and terracotta floor.

Here we find a small chapel, which was once separated from the rest of the hall: there are four saints represented in a 1400s fresco by an unknown artist: Saint John the Baptist, Saint Catherine of Egypt, Saint Anthony from Padova and Saint Francis, surmounted by the symbol of the Agnus Dei.

There’s a 1500s fireplace and a compartment in the wall probably used as a safe or archive.

Inside the adjacent circular tower there are traces of the so-called razor well, the last destination of those who were sentenced to death. 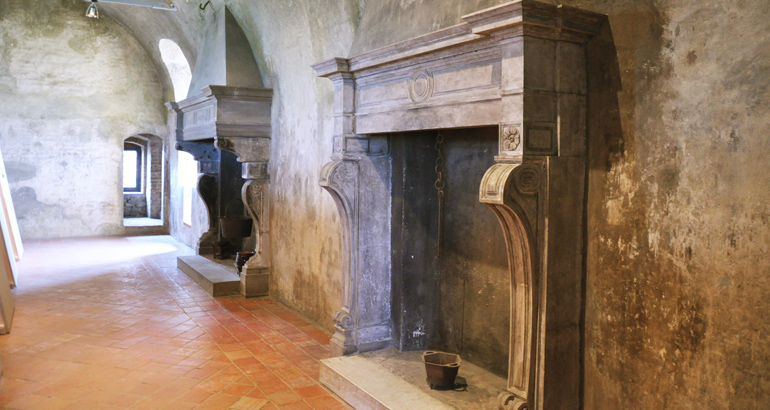 The kitchen fireplaces in the residential area floor

It now appears as a single room with three fireplaces and a sort of small toilette, an innovative and unusual element during the 1300s, but it should be considered as being subdivided into three areas: a kitchen, dining room and bedroom, separated by tapestries and furniture.

Signs, dates and writings on the walls are traces left by those who stayed at the manor. 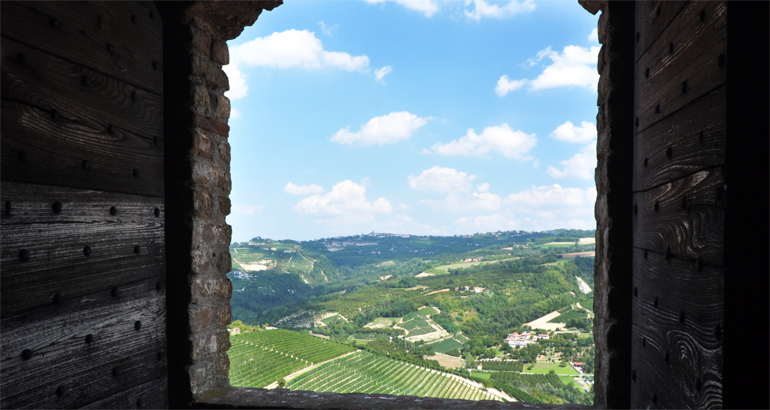 Once you reach the top of the castle, where the walkway is found, the panorama opens up to a 360° view.

We can see the remains of Ghibelline battlements and the throwing tower. The horizon opens up to the surrounding municipalities and hills.

The Serralunga Castle comes across as “unique” within the surrounding landscape, marked by dotted vertical lines with mullioned windows, crenels, and hanging arches, circular towers and decorations; a witness of the typical European medieval fortress.

The visit lasts roughly 45 minutes. For information on visits and opening hours you can contact the Castle directly.

Serralunga is a typical medieval town. From the castle it is possible to see its structure: the houses are built around the castle, in this way it was easy for people to take shelter there in case of war.