«Neive is a rich and well-populated village and the most well built in the Langa area: residence for both and civilian families who own beautiful homes including the sumptuous Palazzo of the Count of Castelborgo, with its adjacent garden which excites the curiosity of foreigners, and those belonging to the Counts Demaria, Doglio and Cocito».

The beauty of Neive, aside from its monuments, can be seen throughout the entire village. Perched atop a hill overlooking the valley, Neive spirals upward toward the top of the relief where the bell tower and the campanile of the San Michele church stand out, respectively symbols of both municipal and religious power.

What strikes you as you walk through Neive is the harmony of the architecture, the external facade bricks of the fortified houses and the tower, the remains of the ancient wall that encircled the refuge and the numerous baroque villas, many of which have lush gardens, which belonged to the nobility and the upper class.

HISTORIC CENTER (from one Gate to the next)

The itinerary we’re suggesting here is an example of a walk that crosses Neive from side to side. We start from the south, from the Gate of San Rocco, and exit to the North of the town, through the gate called San Sebastiano. 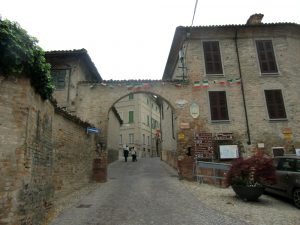 Giovanni Demaria, also known as “the herbs expert”, came to Neive from Cavallermaggiore in 1614, probably made aware of the beauty of the area by the handwriting expert Thomaso Fianchetto who carried out the “Land register for Neive’s territory», in 1581. Upon arriving in the town he established his home in front of the chapel of San Rocco, near the ancient gate that leads to the village coming from Alba. On the left of the arch upon entering Neive, we can still see today the large, sixteenth century brick house (restored in XVII) which was the palazzo of the Demaria Counts, who were already counts of San Dalmazzo il Selvatico, in the province of Nizza Marittima. Giovanni “the herbs expert” – a combination of herbalist, chemist and druggist – was Neive’s administrator numerous times, always respected and well-liked. His reports, at the end of his administrative duties, – states the historian Vincenzo Vada – “are a model of clarity, honesty and rectitude”. He was buried in Neive in 1666 in the Church of San Pietro. The last descendant of the Demaria family, Countess Paolina, left her inheritance to the town to be put to good use for charity work.

The Chapel of San Rocco 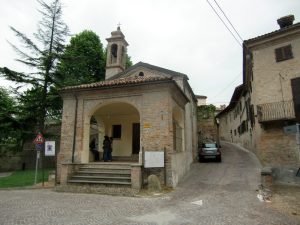 Located in front of the Demaria house, and the southern gate of the town of Neive, is a rural brick chapel dedicated to San Rocco. The chapel, which already existed in the XV century, is dedicated to San Rocco, a holy miracle worker liberator of the plague, the “contagion” as it was called. The central part of the chapel is still original, while the rest was renovated in 1783 by the architect Giovanni Antonio Borghese, illustrious citizen of Neive and author of the beautiful church of San Michele, in the center of the village. It was also the custom of the people to bring their dead before the porch prior to the funeral service, a habit that continues today. Here the body of the deceased is taken by the celebrant and accompanied in procession to the Church.

Palazzo of the Counts of Bongioanni Cocito

Just after the San Rocco southern gate, opposite the chapel, on the left of Via Paolina Demaria, stands an elegant and majestic building, unusual for the narrow streets of the village and the low houses. This is the palazzo of the Bongioanni Cocito Counts, a baroque jewel designed by the architect Giovanni Antonio Borghese around 1750. Worth noting is the entrance portal, the elegant cornice and rational style of the facades. The building’s interior also has frescoes, decorations and stuccos in pure rococo style.

Palazzo of the Counts of Castelborgo 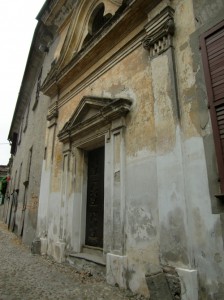 Upon entering the first road on the left of Via Paolina Demaria, we take via Lafleur, once called via dei Benefici. Here in 1735 the Count Giovanni Antonio Cissone decided to build his palazzo. The Cissone were an important and historic family in Neive: in 1566 notable Manfredo Cissone was mayor of the city. However they acquired the noble title two centuries later when, in 1725, Giovanni Antonio bought from Carlo Emmanuel III the title of Count of Santa Maria Alba (eventually to be called Castelborgo), at the price of 3,500 lire. In the cellars of the palace, now home of renowned productions, began the first experiments for the vinification of the Nebbiolo grape in order to produce the wine that eventually came to be called Barbaresco. The second door of the building is actually the entrance to an exquisite private chapel in Baroque style.

Gardens of the Counts of Castelborgo 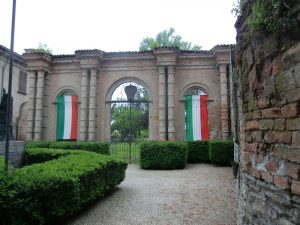 Entrance of Gardens of Castelborgo

Introduced by a series of arches and wrought iron gates, in front of the noble Castelborgo palazzo, we find the gardens of the Counts of Castelborgo. This was once called “the dancing district” because on the esplanade gardens, before they became private, was a small hill where the people of Neive met to dance outdoors. The entrance of the gardens is a majestic work by the architect Giovanni Antonio Borghese, namely the project with which he graduated in architecture. It was built on the will of the Counts in 1752-53, within a broader project of reorganization of the “dancing district”, purchased by the Municipality. On the central gate, now faded, soared the arms of Castelborgo. Inside the gardens, looking towards the right terrace, one can still see the bricks that made up the ancient wall of the Neive refuge. 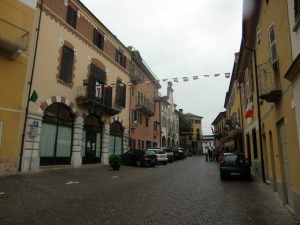 Arriving from the San Rocco gate in Piazza Italia, the town’s main piazza, you’ll be quite impressed by the colorful houses that surround it. The oldest part of the square is to the right, dating back to the medieval period, whereas the buildings marked by porticoes and wrought iron balconies, on the left, were built after the mid-sixteenth century. Among these houses stands the old Municipality palazzo, called the Orologio (Clock), it too dating back to the sixteenth century. However the current structure owes its appearance to a reconstruction by Giovanni Antonio Borgese dated 1760. The style is typical of the Piedmont Rococo, with a large, slender tympanum which holds the municipal clock. Worth noting is the front door, an original piece designed by the same Borgese which is more than 250 years old.

The municipal offices are presently located in front of the old Palazzo Comunale (Town Hall), in what was the residence of architect Giovanni Antonio Borgese (author of many of Neive’s most beautiful buildings and the Church of San Michele). The Borgese family bought the building in 1705 and had it restored by Giovanni Antonio. In the cellars of this elegant and austere palace, we now find the Bottega dei Quattro vini of Neive, where the wines of the area are on display: Dolcetto, Barbaresco, Barbera and Moscato. The shop is owned by the local producers who take turns in running it. Inside the shop you can taste and buy the wines accompanied by cheese and cold cuts. 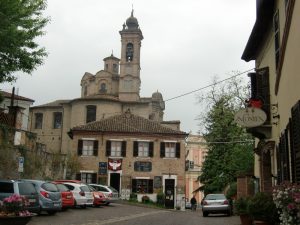 Piazza Cocito and the Restaurant “La Contea” on the right

From the bottom of Piazza Italia, rising to Pian Castello from Via Cocito, you’ll find on the left the palazzo of the Cocito Counts. This building, which dominates the square, was a medieval fortified house, built along the walls of the fortified stronghold. The Cocito were the town’s oldest noble family and always occupied prominent positions. Suffice it to say that 12 of its members were mayors from 1564 to 1590, and they owned much of the territory around the town of Neive. The Cocito palace now houses the renowned La Countea restaurant, which also owns the ‘Il nido della Cinciallegra’ wine bar, right across the street. Here you can taste wines and local products, all packaged by local artisan companies, carefully selected by the owners.

Leaving Neive from the gate that faces north, you can see the rural Chapel of San Sebastiano topped by an arch. The chapel is to be traced back to the fifteenth century but was rebuilt in the eighteenth century. Like San Rocco, Sebastiano too was invoked against the plague and just like the southern San Rocco gate, which is named after the chapel in front, so too is the northern San Sebastiano gate.

The Saturday market in Alba

Alba Underground Journey to the center of the city

Neive is one of the most beautiful villages in Italy. The oldest part of the town, of medieval origins, has remained practically intact and has not been contaminated by contemporary urbanization.