This new itinerary is rather easy, mainly because it’s not too long, although some parts uphill are quite steep. The route is roughly 22 km long and is accessible by all, both beginners and experts!

The stretch between Monforte and the Valdibà hamlet offers a magnificent 360° panorama of the surrounding hills, which is worth seeing during any time of the year.

The route starts in Dogliani

We leave Dogliani via Via Torino, in the Bra-Torino direction.

After roughly 4 km we arrive in Monchiero, and leaving the village we take a right on the first juncture towards Monforte-Alba. From this point the path is uphill for about 12 km, alternating however with some flat stretches that will allow you to catch your breath.

The memorial to the fallen of the Monte Bram Brigade – G.L. 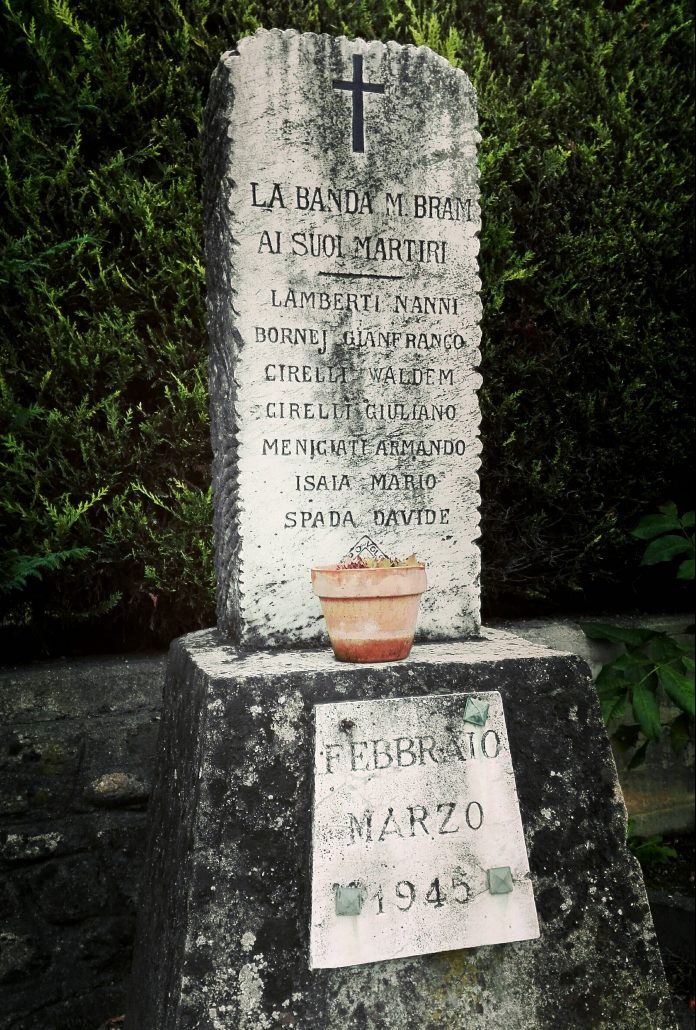 going uphill we cross the old railroad tracks and at the first curve on the left which leads to a straight road, we find this commemorative plaque.

It is placed in memory of the 7 partisans killed between February and March in 1945 in Monchiero, Dogliani and Fossano who belonged to the Monte Bram Brigade of Justice and Liberty.

This is witness to how the Langhe towns, mainly during the final phases of the resistance, had seen the presence, at times even conflicting, of the various Partisan groups. In fact the Justice and Freedom formations, the Commander Mauri autonomous ranks, the Garibaldini and the Matteotti Brigades coexisted in these areas.

Each group paid its tribute with numerous fallen troops.

Continuing along the SP 57 we leave behind the junction on the left for Barolo and we then tackle a climb that is considered averagely steep and continuous which leads us to Monforte d’Alba.

In via Garibaldi, close to the Cathedral, we find the Garibaldini Partisans Shrine. In this area the G.L. group also operated, headed by Giorgio Bocca, the journalist and writer who was amongst the most lucid witnesses of the Resistance.

During the final stages of the war the countryside around Monforte became strategic for supplying material to the partisans, because it was chosen by the allies for launching supplies via parachutes. These launches were needed to keep the numerous partisans in Langa operational.

After leaving the town of Monforte in the direction of Roddino, we continue along the SP57 provincial road.

After roughly 2 km we find on our right the Trattoria della Posta, a historic and renowned Langa restaurant. And from here we take the road on our right towards the S.Anna and Rinaldi hamlets. After roughly 2,5 km we come across a farmstead on the left side of the, at number 34 of the Valdibà hamlet, where we can see this plaque

This plaque is further evidence of what was said earlier on regarding the varied composition of the partisan forces, where the Garibaldini group were those who were most tied to communist ideology.

The Garibaldini Partisans’ presence was quite strong in the Langhe, reaching the point where it could count on roughly 1,500 men in the upper and lower Langa. At the end of the war there were over 140 dead amongst the Garibaldini troops.

From this point on the trail is downhill, and it passes through the Valdibà hamlet, which in my opinion is amongst the most beautiful in Dogliani.

The descent is quite steep, but it allows you to admire the view of the Dogliani hills, and in a few minutes it leads to the town found on the SP56 provincial road.

The name of the village derives from the Latin word "mons clarus", perhaps due to the beautiful geographical position of the upper part of the country.