In the heart of the historical center, not far from the Cathedral, there’s the church of San Domenico.

It has regained its original splendour thanks to the restorings that started in 1926 (by arch. Dellapiana) and were finished in the Seventies thanks to the help of Famija albeisa.

The church was built at the end of the XIV century, by the Dominican friars, settled in Alba since the XIII century.

The church has a primitive gothic style, very austere and harmonic. It has a basilical structure with a 51-meters-long (apse included) nave and two aisles. 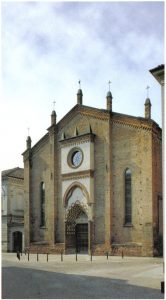 It has groin vaults, with longitudinal arches, both transversal and diagonal; these are placed on central cilindric columns and semicolumns placed along the perimetral walls.

The facade is very simple, with its four strong counterforts, as tall as the roof itself.

The portal is surrounded by many carved little stone columns. In the lunette there’s a fresco with the Virgin and Baby, saint Dominic and saint Catherine from Siena.

The inside of the church has been changed many times; in the baroque era many side chapels have been created, and many XV-century frescos covered.

The restoring has been dealing with the strengthening of the structure and has replaced the pavement at the original level.

Built on the right side of the Tanaro river, Alba gathers and controls the whole production and all the initiatives of this part of Piedmont.