It’s quite probable that Montelupo’s old parish, whose facade runs parallel to via Umberto I which divides the city in two (a few steps further down the current parish), was built while the thirteenth century village was being built.

It may well be that this church was initially a simple oratory that slowly became larger and eventually replaced the parish functions of the previous Santa Maria dell’Oriolo, which was gradually abandoned.

However, the first historical reference that certifies the existence of this cultic building is dated 1574, during the visit of the Bishop of Alba, Vincenzo Marino. The Bishop, in his report on the Diocese properties in the area, also noted the existence of another sacred place of worship: that of the now defunct Santa Maria de Solario, which is presently part of a farmstead called Cascina del Solaio.

It is thus possible – and architectural surveys confirm this – that the old parish’s structure is older, and the date of origin should be moved back to the thirteenth century and not the fifteenth, when the chapel of the Riolo township was still being used. 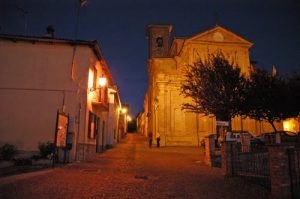 The old Montelupo chapel is a building with two aisles and a humble gabled façade without ornaments, topped by a square bell tower and four arched windows. Just below the roof we can see four anthropomorphic masks in ancient tradition style (similar to the ones found in the thirteenth-century church of Cortemilia or in the fifteenth century mullioned windows of the Sinio castle).

During the 1600s the parish was enlarged and another aisle on the right was added, which can be seen thanks to the step created by the pillar placed on the facade.

The church underwent several alterations and renovations in the eighteenth century, but the increasingly precarious state of the walls and ongoing maintenance, convinced the community and the local nobles to build a new parish.

As a result, the church of Santa Maria was ceded to the Confraternity of the Disciplined, who dedicated it to SS. Name of Jesus and St. Francis de Sales, and it is here that a painting of the praying saint among angels was placed, which is now kept in the new parish of Montelupo.

The Saturday market in Alba

Montelupo owes its particular name to an ancient legend according to which the place where it is located was once inhabited by wolves.