Pian Castello is the highest part of Neive. Here, in a strategic position, around the year One thousand the Neive Castle was built, now no longer visible in its entirety. In its surroundings the refuge fortified by strongholds served as the Castle’s defensive zone.

We can still see substantial traces of these houses (the Cotti dei Ceres fortress, for example), while the actual Castle has been replaced by a private villa, on the right of the clock Tower.

It was here where Neive’s medieval “castrum” stood, built around the year One thousand, and the subject of much contention between the towns of Alba and Asti. The fortress was part of the refuge’s defensive system and dates back at least to the thirteenth century.

News of the Ciotti family begins in 1200 in the Rigestum Communis Albe (the medieval register of the Alba Municipality), where a certain “Guillelmus Cotus” was already referred to as citizen of Neive. In the fourteenth century, a miniature of the building appeared in the Astensis Codex under the heading “Castrum et villa Nevearum”.

As evidence of its antiquity, the building has arched windows and a tower in the east, presently damaged. Furthermore, in the archivolt of the entrance door, Roman bricks were found during restoration work bearing the mark of a Roman furnace of the time. A further sign that Neive was originally a Roman settlement.

In this house the Vicar Francesco Cotti wrote the oldest Piedmontese text on cultivating grapes and wine production. Hanging on the façade, with a dedication for the grace received, we can see a cannon ball from the San Martino renaissance war. 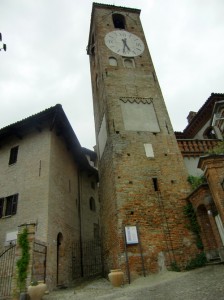 The construction of the tower, as we can establish from documents, was ordered by Asti in 1217 as a fortress against the expansion of the city of Alba; it was, however, only built seven years later in 1224 and had to be constantly guarded by soldiers who were loyal to the town of Asti.

It was actually ceded numerous times, given back and reconquered, often changing owner.

The tower is nevertheless the symbol of the glorious past of medieval Neive, when the city gained the status of Free Municipality. The tower, roughly 5 meters high, houses a Roman tombstone now faded by time.

The inscription dates back to the first or second century A.D. and is a monument dedicated by a certain Caio Elio to his wife Valeria Terzia.

And finally, at the top, we can see the turning swivels, used for signaling between the Barbaresco and Castagnole Lanze towers.

Alba Underground Journey to the center of the city

Neive is one of the most beautiful villages in Italy. The oldest part of the town, of medieval origins, has remained practically intact and has not been contaminated by contemporary urbanization.