Castiglione Falletto is one of the “Barolo Langa” towns, or rather one of the 6 core areas that form part of “The wine landscapes of Piedmont: Langhe-Roero and Monferrato” recognized as a UNESCO World Heritage site in 2014.

Its center is located in the immediate vicinity of Barolo, La Morra and Alba.

Based on the discovery of a tombstone, we can envisage the area being frequented as far back as Roman times.

The origins of the Castle

The origins of the Castiglione Falletto Castle are lost in the mists of time and the documents that have survived are few and lack any useful information.

As far back as the Eleventh century there is evidence of a fortress in the area.

The first date in which the castle appears, is in fact 31 July 1001, when the name of the location and its fortification appear in a diploma issued by Emperor Otto III with which the sovereign granted Castiglione and other castles in the Alba area to the Marquis Olderigo Manfredi, Count of Turin.

It wasn’t, of course, the present building, even if it more or less occupied the same area.

The name of the person who originally had Castiglione built is unknown, yet we know that in the Middle Ages the building was known as “Castrum et Villa” owned by the Marquis of Saluzzo.

The building is 50 meters long on the Piazza Vittorio Veneto side, 40 on the Via Cavour side and 50 meters on the Municipailty side. 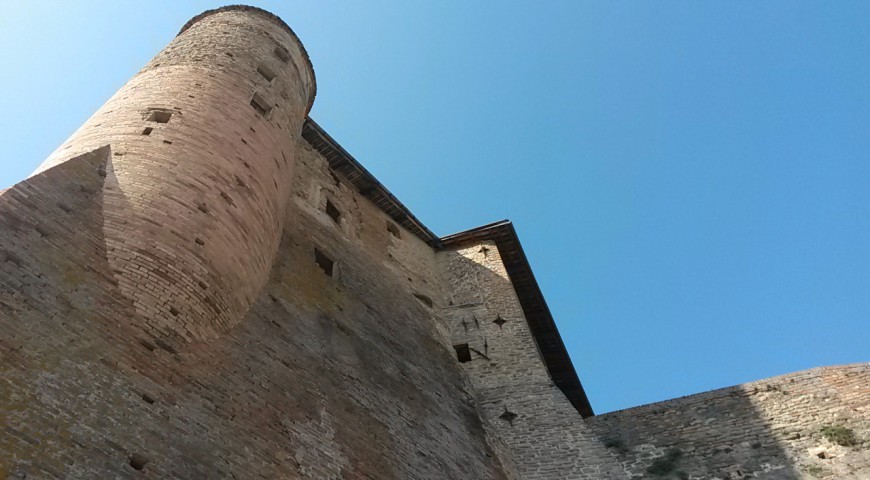 The architectural complex presents itself as a massive structure with an irregular plan that follows the lay of the land. It is characterized by two massive round towers placed at the corners and a third central tower that has a circular form and is rather large.

This characteristic is rather peculiar to the area; a castle like Castiglione has circular towers: while in the neighboring castles of Serralunga, Grinzane and Barolo, it is more common to see imposing angular towers that can be either square or polygonal.

The wall of this formidable tower is roughly 2 meters thick and then gets thinner to about 1.60 meters as it rises. Inside we find a cell with a barrel vault that has a small square entrance that leads to the upper floors where it is possible to retrieve, in case of attack, the rope or wood ladder, thereby isolating the tower from the castle floor.

The central quadrangle, roughly 17 meters in size, was probably the first castle in the area where some small villas stood.

The Marquis of Saluzzo

In the 12th century following the will of Bonifacio del Vasto, the castle is owned by the Marquis of Saluzzo. The initial reinforcement works are traced back to the same period.

In 1225 the town of Castiglione appears in a document in which the Countess Alasia di Saluzzo gave the fief to one of the Falletti as compensation for his services during several wars. It was probably Bertoldo Falletti from Alba who built the castle as it still appears today.

In the second half of the 18th century, it was taken on by the Arcadian poet Giuseppe Cerutti who restored it and it was then owned by the Caramelli and the Clarotto families.

The Falletti themselves settled in Castiglione in 1300, a period in which the castle took on its present grandeur via the construction of the outer walls and turrets in the corners.

For many centuries the building housed the descendants of the Falletti family, to the point that the Falletti name was added to the town’s name as recognition of the importance and the role of this great family of feudal lords of the Langhe.

It was quite probably Manfreone and Daniele, the Falletti brothers, who, during the second half of the 14th century, erected the curtains and the circular corner towers thus giving the castle the appearance of a mighty and fortified quadrilateral.

During this same period the ground in front of the castle is leveled in order to build a place of worship, which in the 16th century became the parish when the worshipers abandoned the church of San Lorenzo outside the walls; the first devotional nucleus which developed around a chapel which no longer existed located near the village.

There is evidence that at the time the ground was at least two meters lower than it is today and the walls were at least 2 meters higher; this is proof that the manor became a genuine fortress. 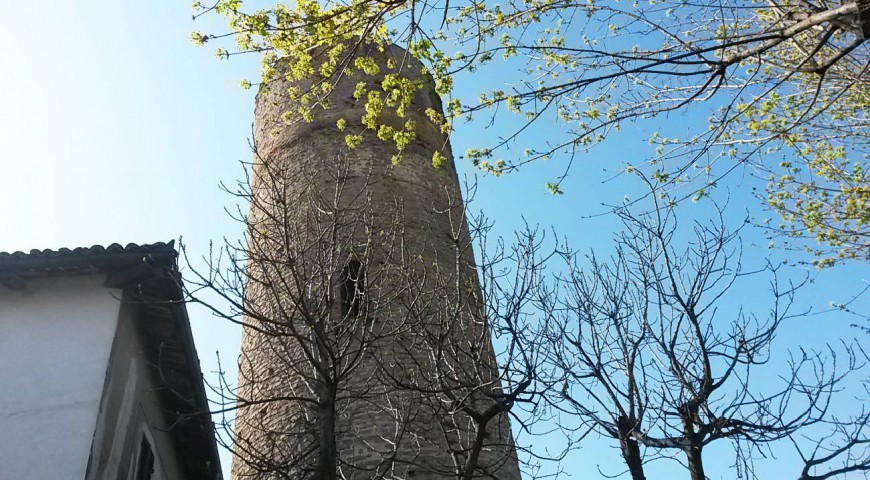 The transition to the Savoy

The castle was equipped with a family chapel, dedicated to St. Mary in Castrum, which was later given to the local community as a new parish. This church, which preserves some frescoes by Pietro Paolo Operti, was originally built in the Romantic style and in 1983 it was restored with neo-Gothic lines, decorated and enriched by the expertise of the Finati brothers, Alba painters.

In 1601, as a result of the Treaty of Lyons, the castle became property of the Savoy via the acquisition of the Marquis of Saluzzo. The Savoys thus acquire an outpost facing the lands of Monferrato in an attempt to conquer it.

Apparently during this period part of the side curtain is knocked down in order to raise the embankment as it was no longer necessary to defend the castle against bows, crossbows and arrows, rather from cannon shots.

In 1631 the Savoy acquired Monferrato as well and the area enjoyed a period of peace and tranquility: the castle lost its function as a fortress and became a dwelling. 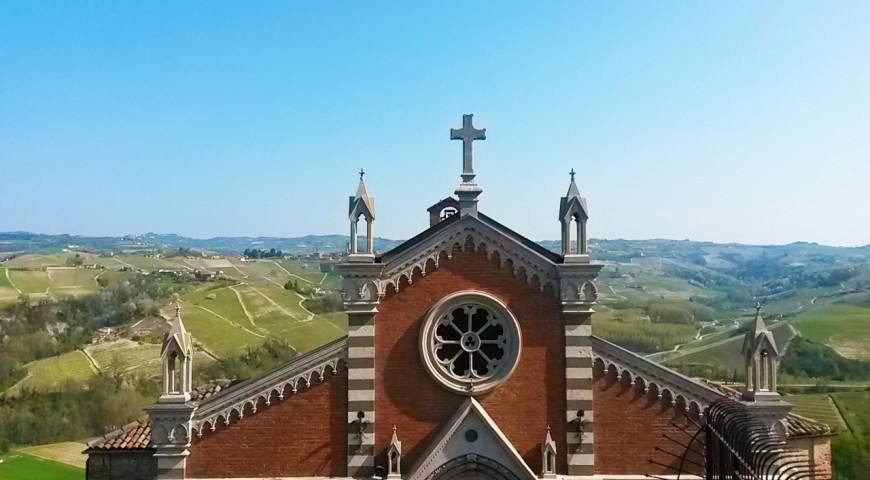 Parish church of San Lorenzo and views of the Langhe hills

A steep slope leads to the front gate dominated by the main tower. The 18th century staircase leads to the panoramic upper terrace base of the aforementioned tower where you can visit the lower chamber.

The interior is divided into two floors with a large central reception hall and side rooms with fireplaces and frescoed ceilings.

Downstairs we find an ample vaulted kitchen with a large oven, and an enormous stove for preparing the garrison’s meals, and the armory from which you access the Southeast tower called the “cutei” (knives) which in ancient times served as a prison.

A small oratory preserves traces of medieval decorations, the fortified walls enclose a beautiful garden that serves as a genuine balcony on the Langhe.

Over the centuries numerous families became the manor’s owners: among all of them, the Scagnello family has a special significance for Castiglione: the Count Patrick Philip of Scagnello worked to beautify the castle making it in all respects a noble dwelling

As of 1870 the Vassallo family became owners of the castle. Since then, right up to the present, there has been considerable recovery and restoration work carried out on the castle due to some structural failures that undermined (and undermine to date) the building’s correct preservation.

In early 2015, the building’s precarious conditions and the need to carry out major restoration work led to a long-standing acquisition agreement for public use between the town of Castiglione Falletto and the Vassallo family, the current owners of the manor.

On Saturday April 11, 2015 the imposing medieval fortress opened its doors to the public once again.

As we await for the beginning of the interior restoration work, only the garden is accessible which nevertheless allows for a spectacular 360-degree view of the Barolo Langa.

The castle in Castiglione was a defensive feature of the powerful Falletti family. Nowadays the territory of the town is entirely included in the docg Barolo wine area.