From Bergolo’s town square, the route takes the provincial road which goes down to Cortemilia for 500 meters. At the first turn, the route is signed on the right and passed by the group of houses it goes on the crest of the hill. At the first crossroad it flows on the left and enters in a gravel road till Cascina Fontana. Here the route turns right descending into a group of pines near a “bricco”. Then the road turns left into a forest and goes forward till it reaches a lonely farmstead. 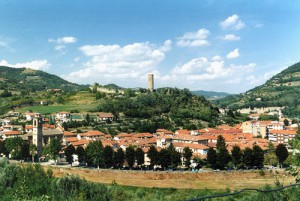 A little after the farmstead the gravel road ends and an asphalt road begins and goes down into the provincial road ending in Piazza Savona. From Piazza Savona the route crosses ponte Bormida and advances in Alba direction. Near the old San Francesco monastery it turns on a cobbled path which ends in an asphalted road near the ruins of Cortemilia’s Castle.

Near a chapel, the route continues on a cobbled path till Bric Castelmartina; at the first marked bifurcation it turns right and goes forward on a gravel road reaching another crossroad. 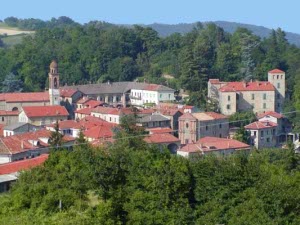 Exiting from Castino, the route follows the State Road (direction Alba) for a little bit turning on right into strada Molino.

Through fields it goes downhill passing near Cascina Cane and crossing Belbo torrent, reaching then, on the bottom of the valley, the provincial road. Here it turns right ad goes up for fifty meters and then it turns into a little path on the left which crosses an asphalted road.

The path passes by a votive pillar and then turns right reaching an handful of farmsteads. It ends in San Bovo’s town square.

The smallest town of Langhe (and one of the smallest of the whole Italy) was one of the first to realize how this territory could be touristically important, and to build modern accommodating and recreational facilities.