The route begin at the small train station in Santo Stefano Belbo, where on the front, a plate in memory of Cesare Pavese recites: “I heard between peaches the arriving trains which fulfilled with their sound the valley”.

The route follows for a short distance the rails and, after crossing them, it turns right along castroni asphalted road up to Vedetta house, an amazing panoramic point over the Belbo Valley near Moncucco Hill South Seas. 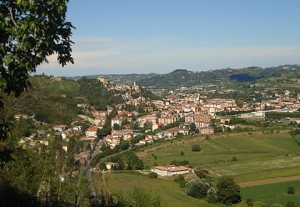 The route then leaves the asphalted road entering in a small path through vineyards and woods up to Bauda Hill. On the top of the hill lies Cascina Cantero where the road turns right through a woody path. On the exit, the old Contini Tower surrounded with the beautiful panorama over Canelli can be seen on the left. Then the route comes down till the road which goes from Canelli to Nido.

For the comeback it’s needed to walk backward for a little distance, and then advance on a path in the middle of Bassano Hill through a vineyards area. On the left, behind Belbo torrent, there is Gaminella Hill. After passing near the Salto Hill The route reaches then the State Road (from Canelli to Santo Stefano Belbo) on which many pavesian places can be found: la Mora, il Salto, and Nuto’s home.

The route is marked with two square: red an white.

The tower of Albaretto della Torre

The sanctuary of Madonna della Neve

The village stands on the border of the Langhe, in a hilly area. Santo Stefano Belbo was the native town of Cesare Pavese, whose house hosts today an important museum.