In Alta Langa, ancient routes cross the hills, going from town to town, from village to village. Following these paths is the perfect way to reach places of cultural and natural interest surrounded by the beautiful and wild landscapes of these lands.

From the Municipal square in Saliceto, the route turns right, along Via Moizo, and after few hundreds meters it turns left, following the way which lead to the hill. The winding road goes up till it reaches some farmsteads, here the asphalt ends (km 2.4). The route continues on a gravel ground up to the votive pillar built over the stone stratifications. After few meters it leaves the gravel road and enters in an older, irregular stone-flagged path (Km 3.3).

A long plain in the forest allows to reach big green meadows. After the crossroad, the route follows the crest of the hill and enters again in the woods. It goes up till Cascina Baraccone and its lonely votive pillar (Km 5.7). At the next crossroads the path goes to the left, and left again to the next one. After that, going downhill the route gets over Bricco Baraccone and reaches Quattro Vie Hill (Four Ways Hill), the junction between Bormida Valley and Uzzone Valley. Then it crosses an asphalt road and continues on a gravel ground.

The path goes forward, through the forest and near the crest, on an often muddy roads surrounded by chestnuts trees, oaks and pines until it reaches the wide spaces which encircles the Sanctuary of Madonna di Gottasecca. Its needed to go backward for a little distance till the crossroads, then the route takes the left path and, after another votive pillar, it enters in the small village of Gottasecca. From the town’s square, a small and steep road climbs up the hill and just a few meters before the cemetery, the route turns left and then right on the crossroad. On the top of the hill the ruins of the ancient castle emerge from the ground. 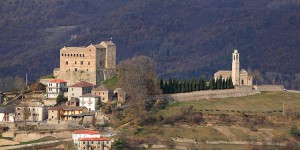 Castle and church of Prunetto

Going back to the last crossroad and following the main road, which pass near the aqueduct reservoir and turn left, the route goes up to the crest of the hill through a pines forest and comes down on a wide gravel road. After the votive pillar, it climbs up the hill reaching Bricco della Colma. After this the route turns right into a beeches forest, from which it comes out near Piani village, a place with a beautiful panorama over Uzzone Valley and Prunetto’s Castle.

The routes turns right coming down till the first farmstead. It bends on the left and enters in a wood and takes the direction which lead to Prunetto. It reaches the parking of a restaurant and turns right straight to the town’s Church (San Sebastiano). 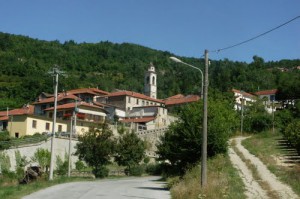 Exiting from Prunetto the route continues along the Provincial Road in direction of Levice, and turns left in a little street which leads to the castle on the top of the hill. After the castle the roads goes down reaching again, after Frazione Serra, the Provincial Road. Walk along this road till the first crossroad and take the central path, direction Bricco. After 400 meters circa the route turns left and continues on a little road between the trees which leads to Cascina Coste. Here the route turns right in Bricco delle Forche and left, entering in the forest till Piano della Croce.

Going forwards the path crosses an asphalt road and a chestnuts forest reaching Bricco Massimino. Then the road widens and with a fast descent it reaches Bergolo.

The Friday market in Murazzano

Prunetto is located at a lower height than the fortress on which the medieval town stood. The area located on the ridge that divides the Val Bormida from Uzzone houses one of the most important historical-architectural complex of the Alta Langa.

The Friday market in Murazzano