Of considerable interest, as an example of a castle complex, renovated and enlarged over time, the castle of

Various scholars have written with regard to this testimony of composite historical architecture: Ludovico Vergano, Renato Bordone, Baldassare Molino and others.

The first documented mention of the area is found in an act dated 980.

It was acquired by the Municipality of Cisterna in 1912, through a donation of the Savoy, and since 1980 the castle has hosted the

“Museo Arti e Mestieri di un tempo” (Museum of Arts and Crafts of the past).

Upon observing the exterior, we see that on the eastern edge of the castle embankment rises the quadrangular tower, made of exposed brick.

It was probably built to replace a pre-existing one by the Lords de Gorzano after 1242, when Giacomo and Manfredo di Loreto sold their Cisterna lands to the Municipality of Asti.

According to Inzerra Bracco and Nanà Villata in a 1989 book:

It has a square layout of roughly 5.80 meters on the side; the walls are roughly 1.10 meters thick at the base and it’s circa 30 meters high; the wall fixture is perfect and the average thickness of lime between the bricks is one centimeter.

On each side four large openings with a round arch are visible; above these, we can see four small single windows, which seem to belong to the tower’s primitive project.

On the floor of the castle’s attic, an original opening of the tower is still preserved, with an external round arch and trapezoidal clay bricks. There is a decorative band that crowns the tower consisting of four series of protruding bricks.

There’s no clue instead of the existence of battlements in the past; originally it was probably covered by a roof, as it appears in old representations.

The tower-door access to the upper fortified enclosure of the Cisterna castle is basically of the same era.

This sector includes a large enclosed area, which isn’t accessible and includes overhanging walls and the square-shaped summit core.

Some peculiar elements characterize the tower door: the round-arched portal, the string courses, the closed battlements.

Of particular interest is its decorative frame which is made up of several bands of bricks interposed with lozenge frames. This frame is surmounted by dovetail battlements, now closed and covered by the roof.

This gateway to the bastions floor may have been opened by reshaping an older building, perhaps initially intended for the guardhouse, but which until the nineteenth century was located in a building flanked by the tower-door.

Another aspect of the castle’s architecture worth highlighting regards the sixteenth century, which differs considerably from the usual transformations of stately homes.

Among the validly fortified Piedmontese centers, between 1536 and 1559, only two are found in the Roero area: Cisterna d’Asti and Sommariva del Bosco.

Particular care is taken during these years in creating structures and bastion walls that are capable of opposing the firearms that were being developed in that period.

The obsolescence of the previous defensive systems, made up of the vulnerable single-curtain system, was, within limits, resolved with up-to-date “modern” restructuring.

This is how the Cisterna fortifications are distinguished, represented by the military architect Francesco Orologi in his ‘Brief reasons on fortifying‘ code dated 1536-1559.

In the essay, Cisterna is illustrated graphically as a bird’s eye, with two bastions and a masonry platform prior to the Orologi visit.

While another drawing regarding the «La Cisterna Fortress», dated 1581, is preserved at the Secret Vatican Archive in Rome.

Furthermore, a seventeenth-century view from the west of the complex is found in the center of the large altarpiece painted in 1664 for the S. Giuseppe church in Cisterna. 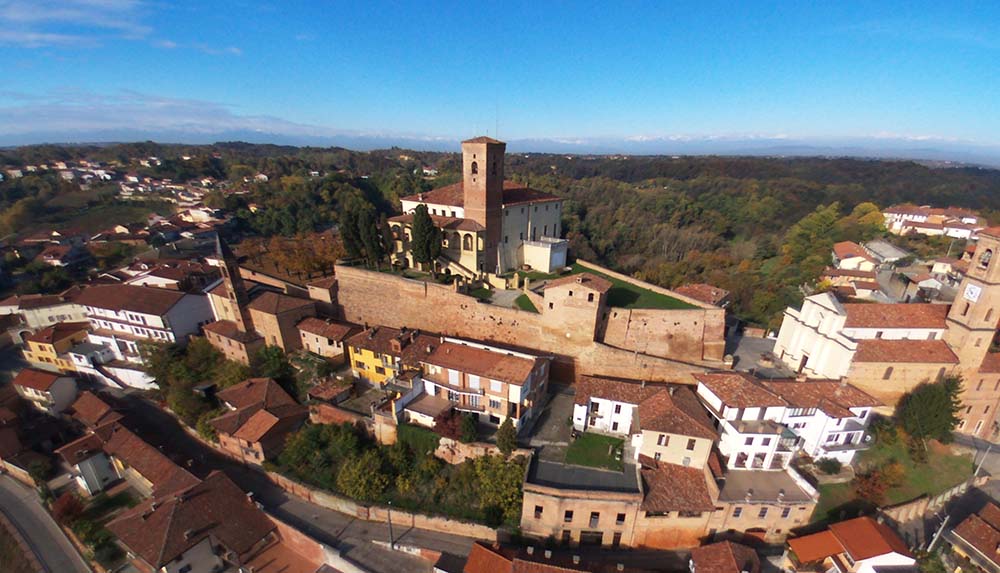 The Cisterna 16th century fortifications were built in a very tormented situation: initially damaged during the French occupation, the area was disputed between the Holy See and the Milanese Acerbo family.

The dukes of Savoy supported the papacy; so much so that in 1581 the duke Carlo Emanuele I besieges the castle successfully.

After surrendering, and following the likely damage which was previously caused during the grave belligerency between the French and Spanish, which devastated Piedmont in the first half of the sixteenth century, the Duke of Savoy proposed the improved restoration of the fortress to the apostolic nuncio, giving the designing task to military engineers Domenico Poncello and Ferrante Vitelli initially and eventually to captain Bonforte Asinari.

Yet prior to these events, in 1538, the castle had been strengthened with bastions by the French; since around 1544 there was a garrison of 300 soldiers with 12 heavy artillery and 20 light artillery guns.

In 1552 Brissac, commander of the French forces in Piedmont, sent a further contingent of soldiers during the military operations against the Spanish as stated by San Damiano d’Asti.

Two high, massive bastions in masonry can still be clearly seen: the north-east is attributable to the sixteenth century, while the south-west one is dated 1690-1694.

Between the second half of the sixteenth century and the following century, the castle’s residential sector was considerably restructured.

Further improvements were also made to the sixteenth-century body, the double staircase and its open gallery.

In particular, in 1670 and in 1673 the Marquis Giacomo Del Pozzo obtained from the pope, who owned the area, the transformation of Cisterna into a Principality and the right to mint coins.

As a result, work was carried on the mint on the ground floor so as to extend the castle’s complex towards north-west.

Between 1687 and 1690, works were carried out to re-adapt some of the interiors on the main floor, including restoration work in the rooms and showy ornaments with refined Baroque taste stuccos.

In 1694 the bulwark surrounding the lower garden was built.

During the eighteenth and nineteenth centuries mainly maintenance work was carried out.

From inside the castle’s tower-door we can access the tunnels, which were already indicated in a map dated 1581, mostly articulated under the courtyard at a depth of five meters.

On the sides of the main one we find six large niches, some with bas-relief engravings on the rear walls of the marl.

Two of them show symbolic representations that cannot easily be interpreted: in one we can see a Greek cross above a sun or radiant disk, while in the other one we see a kind of rudimentary fish hanging from a visor. 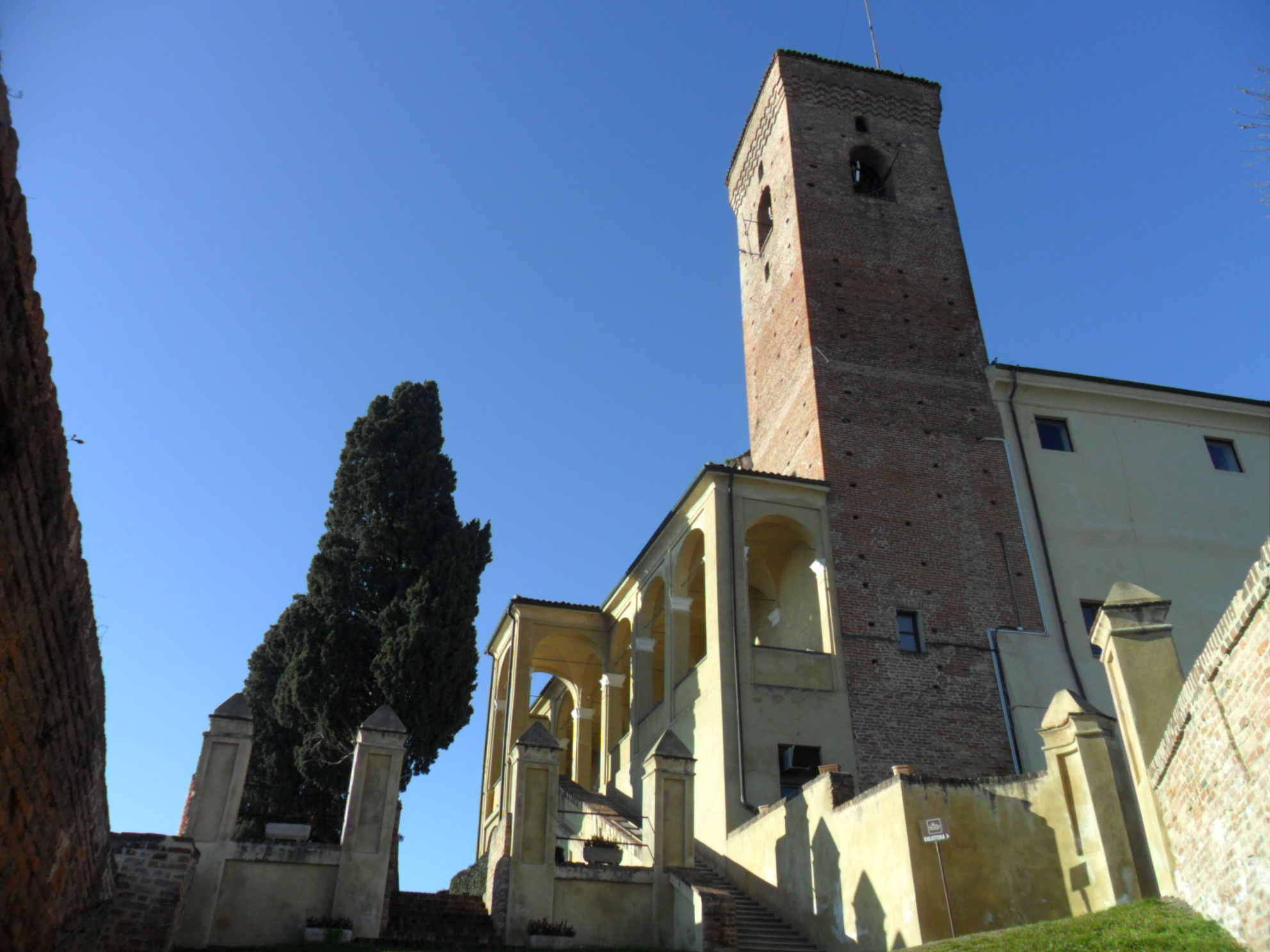 Among the various writings, graphic elements and scribbles (overlapping, at least until 1857 and beyond), we can still note the following subjects: hen, coat of arms, fish, knot-like shape.

These “illustrations” (preparatory drawings or initial ideas for unpainted frescoes, or perhaps divertissement?)were probably done after 1581 (when Carlo Emanuele I of Savoy reconquered the castle and then partially restored it with the pope’s benevolence).

Some descriptive/interpretative observations lead to a realization phase between 1581 and 1618.

The heraldic weapon of the Savoy is clearly defined to indicate the dominant family and commissioner (starting in 1581) of works to the castle.

In particular, the knot-like design of which neither the head nor the end appears, represents the so-called Solomon’s knot.

Other interiors in the castle

The large central hall corresponds to what used to be the castle court.

Under the floor we can still see the cistern, which probably gave the name to the site and eventually to the town.

Other internal rooms of the castle complex, at least until the nineteenth century, were intended for a sought-after noble residence and a family chapel.

The sanctuary of the Piloni

MuBATT Museum of the Battle

The church of saint Augustine

By bicycle from Monticello to Bra

The Tuesday market in Canale d'Alba

The center is dominated by the imposing castle with a powerful system of walls. This is home to the Museum of Arts and Crafts of the past.