The castle in Grinzane Cavour is one of the best examples of the medieval architecture in the Langhe. Its present shape is the result of a complete restoring made in 1961, that has reshaped it in its original features after the many reworkings.

The most ancient part of the building, the central tower, was built in the XI century, while the main building in the XV. First owned by Bonifacio del Vasto in the XII century, the castle has had many different owners: from the marquis of Busca to those of Monferrato, until it was bought, at the beginning of the nineteenth century, by Michele di Cavour, father of Camillo, who widened the already vaste land surrounding the castle. 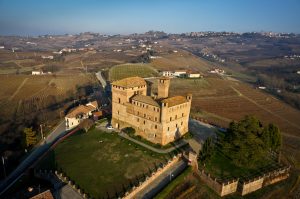 From the Benso di Cavour family it was then sold to the Alfieri di Sostegno, who gave it to the town of Alba in 1932. After the restorings in 1961, it now is a Regional Cellar and Piedmontese wine shop.

On the first floor there’s the Trattoria del Castello restaurant, and up again a museum. Beautiful is the masque salon, from the sixteenth century, with a precious wooden painted ceiling. A part of the museum shows objects of the local rural culture, while other rooms deal with the white truffle, relics from the Cavour period and an exhibition about the wines inthe Langhe in the Roman era.

Grinzane Cavour is 6 kilometers away from Alba, on the road to Barolo and Monforte. Placed on a hill and surrounded by vineyards, the town is dominated by its medieval castle.