This is one of the few markets that are still held on Sunday mornings. In fact the municipality of Costigliole d’Asti is composed of numerous villages and the market has always been the meeting place for the scattered inhabitants of the Asti town.

It once occupied the entire concentric dominated by the imposing castle, whereas today there are only a  dozen stands hosted in Piazza Luigi Medici del Vascello, formerly San Rocco

The area where it’s held doesn’t make it particularly characteristic: beyond the fish and anchovies stand run by Aldo, who sells his products in various other markets of the Langhe and Roero area, you’ll find the usual assortment of stalls selling clothing, shoes, and household items. 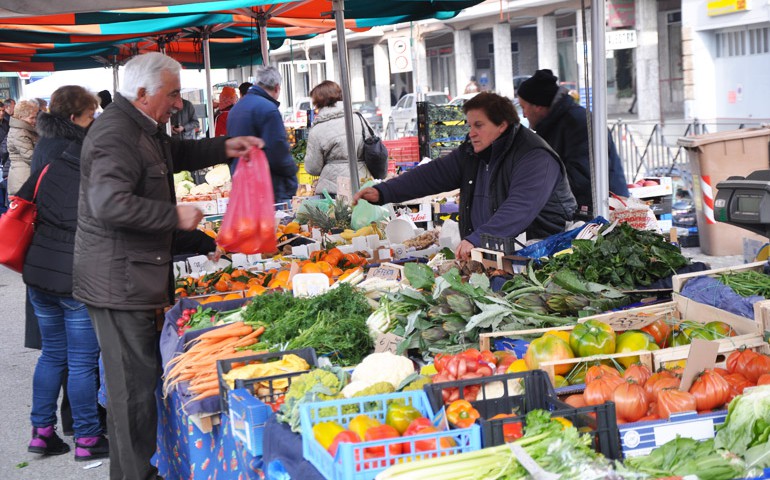 The fruit and vegetables stands

There’s also a seeds and bulbs stand and a cheese stand belonging to the C. Bianca Agriculture company owned by the Cavallero family from Loazzolo. Its rich assortment includes various seasoned products made with goat, cow and sheep milk.

The heart of the market is represented by a traveling rotisserie that offers specialties such as Langhe chicken and the fruit and vegetables stalls including Silvano’s from San Martino Alfieri.

Don’t forget that the Motta di Costigliole village is considered “the vegetable garden of Low Monferrato” and that its square pepper, a form of cultivation that unfortunately is slowly being abandoned in favor of floriculture, is a real delight, well known by all gourmets.

The Sunday market in Costigliole d'Asti

The tower of Castellino Tanaro

The parish church of saint Anthony the Abbot

The parish church of saint Lawrence

The town revolves around the majestic castle, now a municipal property with an almost thousand-year history. At the end of the eighteenth century it was owned by the Marquis Filippo Asinari, politician and diplomat who dedicated time and passion to wine.