Originated over thousands of years of water erosion, which has consumed the marl soil of marine origin, they present themselves as unexpected to the visitor like a spectacular, gray-white, amphitheater.

The clayey rock walls within the large crater are too steep to allow any growth of trees.

The minerals that make up the soil are too poor to allow anything to grow, with the exception of  broom, juniper and pine bushes.

The highest edges are covered with elms, oaks, shrubs and evergreens. Wildlife populates the more peaceful and quiet areas of the site: it’s not unusual to observe foxes and wild boars move undisturbed at the bottom of the Rocks.

Starting from the town of Treiso the Rocche can be easily reached by crossing the Giacone and Canta villages and then heading towards Borgata Meruzzano.

The paved road descends slightly before reaching a couple of tight turns.

After crossing a few houses the landscape appears orderly and uniform, articulated by geometric lines of vineyards that are well exposed to the sun and cultivated with  Nebbiolo and Moscato.

A sign and a clearing encourage you to have a rest.

Then what appears before your eyes is an enormous void: the sensation can cause dizziness when looking at this deep depression that opens up over the railing. 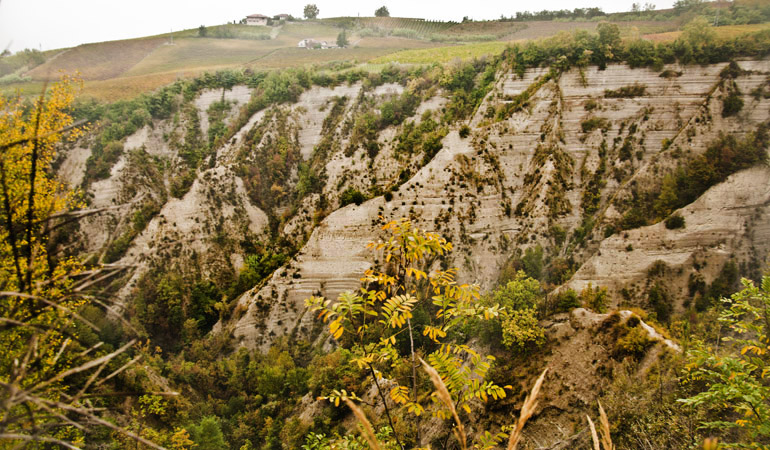 The origin of the name

The origin of the name carries with it a legend that has been passed down for centuries.

Legend has it that seven brothers used to go here to scythe the grass.

When lunchtime came round one day they were joined by a pious sister with a basket containing a simple lunch. Indeed, it was Friday, a day that called for abstinence.

The brothers who were hungry and not too keen on religious practices got angry with their sister and began blaspheming God and Saints, refusing to interrupt the meal as a priest passed by bearing the Communion for the town’s elderly and sick people.

Having challenged the sky, the brothers were swallowed up in a chasm beneath their very feet. Only the sister was saved, remaining standing on a narrow strip of land.

The Cliffs, Fenoglio, the Resistance 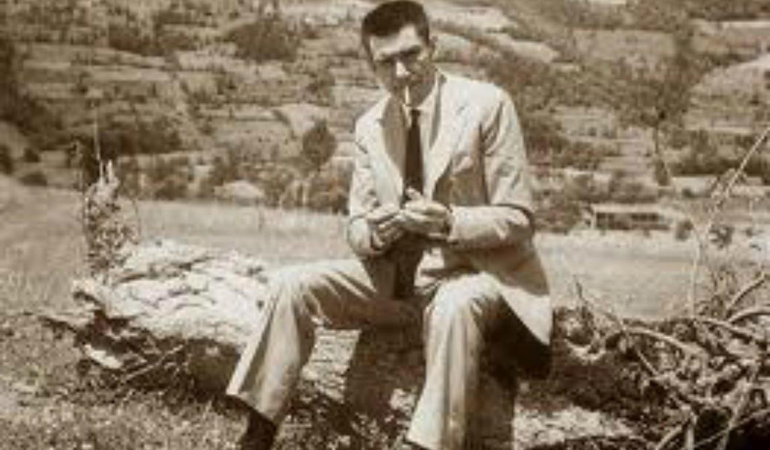 The Rocche dei Sette Fratelli site is part of the “Fenoglio locations” and is one of the stages, the fourth, of the “Romantic Road of the Langa and Roero“.

This location was the scene, along with roads, paths and the surrounding woods, of the Italian struggle for liberation, narrated by the writer Beppe Fenoglio from Alba, in the pages of his novels and short stories.

The town of Treiso has a leading role in “Una questione privata” (A private matter) as the seat of the brigade of which Milton, the protagonist, is the leader. It is also quoted in “Frammenti di romanzo ” (Fragments of a novel) and in the story “L’Andata” (The departure).

It can also be found in “Il Partigiano Johnny” (Johnny the partisan), as the last partisan outpost before Alba.

Around and inside Treiso they didn’t find even one bourgeois. Partisans weren’t expected, because after the fall of Alba the town lacked a garrison. They stopped in the middle of the square of the church and stood with their legs planted wide, each looking in their cardinal point (…)

From that square one can dominate a bit of Langa on the left and to the right the hills beyond the Tanaro river, after which there’s a plain at the bottom where the great city of Turin is found. The morning vapors rose slowly and the hills appeared as if a dress was being lifted off them. (Beppe Fenoglio – from “The departure”)

To reach Treiso, the road climbs through the Nebbiolo, Barbaresco and Dolcetto vineyards. The noteworthy feature of the village is the cliff "of the seven brothers".