This itinerary includes departure and arrival from Bossolasco and develops for about 30 kilometers touching the towns of Feisoglio, Cravanzana, Cerretto Langhe and Serravalle Langhe.

The villages are all around 750 meters high, but the road faces a couple of challenging climbs as it crosses twice the Belbo valley that cuts the route in two. Throughout this portion of Langa the famous Tonda Gentile hazelnut of Langhe is cultivated.

A long rather regular climb leads you to the center of the village, from which you exit by taking the provincial road 31 towards Cravanzana.

The landscape of the Alta Langa is much less modified by man, and the woods have not given way to the vineyards like at lower altitudes. Along the crest of the hill you’ll have different views of the Belbo valley from above. In a few kilometers of ups and downs you’ll arrive at Cravanzana.

Before arriving at the town, instead of entering the center, continue on the road: after the police department on the left you’ll see a memorial plaque in memory of 4 partisans: Doino Raimondi, Paolo Malagamba, Giovanni Galandrino and Giuseppe Poggio.

The first 3 died on March 4, ’44 surprised by a patrol of Germans as they went to the valley to liaise with other partisan groups, the fourth died on the same hill on November 4.

A few hundred meters after the plaque there’s a first junction on the right for Torre Bormida and then one on the left for Cerretto Langhe that will take you on the provincial 323. In 6 km you’ll arrive at the village, after crossing the Belbo valley again.

Continue the ascent along the provincial road 57, and at the Pedaggera hamlet take a left along the SP 32 towards Serravalle Langhe.

The Partisan Command of La Villa

After crossing the village of Serravalle, after two curves, an indication to the left indicates the hamlet of Villa. If you follow that road for 2 kilometers you’ll reach a group of houses where from ’43 met three of the main commands of the garibaldine formations operating in the Langhe.

This grouping was of great importance not only for coordinating operations in a crucial area for supplies and communications with Liguria, but also for countering the emerging forms of autonomous rebellion that aimed more at banditism than at liberation from Nazi-fascism. 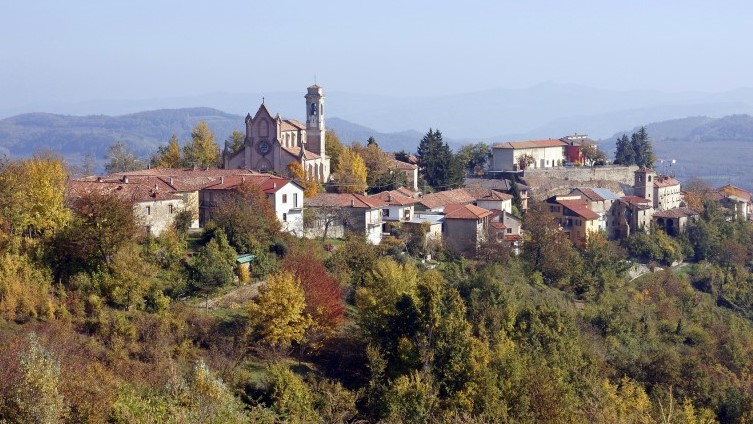 Return to Bossolasco, the Resistance park

Return on the sp 32 and continue towards Bossolasco.

At the roundabout before entering the village go left into the street Galli and in a few corners you’ll be at the Resistance park, greeted by a plaque that reads “Here live forever the eyes that were closed to the light so that everyone could have eyes open to the light forever“, a sentence by Ungaretti composed specifically for the park.

Although small by extension, it is a place that leads the visitor to become estranged from the surrounding environment, ideal for a break for reflection and rest after the hardships of pedaling!

The town is one of the most important centers in the production of hazelnuts. The upper part of Cravanzana houses the historic center that is clustered around the parish church and the mighty medieval castle.