This new itinerary starts and ends in Murazzano, and the route’s ring reaches Clavesana and passes through the villages of Ghigliani and Sbaranzo.

The total length is 37km, with an altitude difference of about 500 meters.

There are no particularly steep sections, but the return from Clavesana is via a continuous climb of about 10 km.

Today Murazzano is best lnown for its formaggio D.o.p. (Protected Denomination of Origin) cheese, among the oldest in Italy, but during the Resistance it was an important center for monitoring the operations in the high Langa area.

There are two plaques in memory of that period in the historical center, in Piazza Umberto I. Two twenty year old partisans, Fausto Pezzotti and Giovanni Marazzi, were shot in this square on the evening of January 2, 1945.

Another plaque commemorates the famous “Blonde Lieutenant” Gino Ghibaudo, killed by the Nazi-fascists on the outskirts of the village in 1944. His exploits are also mentioned in Fenoglio’s book, Partisan Jonny.

Upon leaving the town along Via Roma, we take the State Road 661 towards Belvedere Langhe. On the way we pass by the Chapel of St. Sebastian, where a plaque commemorates another massacre. This time it concerns the killing of unarmed civilians, that had nothing to do with military activities.

This is what happened: on the 3rd of August 1944 partisan Spartaco Ermini was in the chapel watching over the body of another partisan, killed the day before, awaiting his burial. At the sight of a German convoy he tried to escape in the direction of the Cacciadoro farmstead.

After killing the partisan, the Germans went to the farmstead, where Pietro Pagliano and Angelo Giacosa were busy baking bread. The Germans accused them of being at the service of the partisans and killed them both. They then burned down the house and headed towards Dogliani, but not before brutally beating the housewives.

Shortly after, two other civilians, Paolo Odello and Antonio Freddo, went to help the survivors. After half an hour the Germans returned and killed them as well.

Near Belvedere, we leave the State road and take Provincial road 59 and follow the signs for Clavesana.

We begin to descend and after about 2 km we come across a juncture that bends down towards the valley and indicates the village of Madonna delle Surie. We then take the road that runs alongside the village and continue going down for another 2 km.

The descent is quite beautiful, and has a fantastic view of the plains below. Nevertheless we must be careful because there are some difficult curves. The road then skirts the village of Ciri and we find the monument is located on top of a hill. 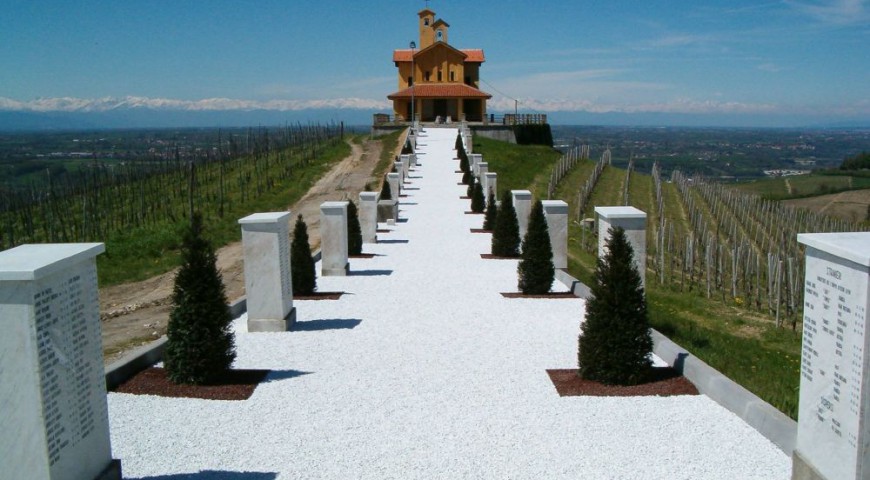 It’s quite an enchanting location, built at the end of 1945 upon request by the famous Commander Mauri. The names of circa 800 partisans can be found along the boulevard leading to the chapel.

We now start heading back on the same road, passing by once again the village of Ciri, and shortly after we take the crossroads in the direction of the village of Ghigliani, which gave its name to a detachment of the Langhe Division, led by the young officer Italo Gatto.

We continue to descend, crossing the villages of Ferrua and San Bartolomeo, and we arrive at the Tanaro river near Madonna della Neve. Here Italo Gatto met his death after blocking a German convoy beyond the bridge, thus allowing his companions to reach safety. For this action Gatti was honored, post-mortem, with the rank of Marshal. Heading right we arrive at the historical center of Clavesana. 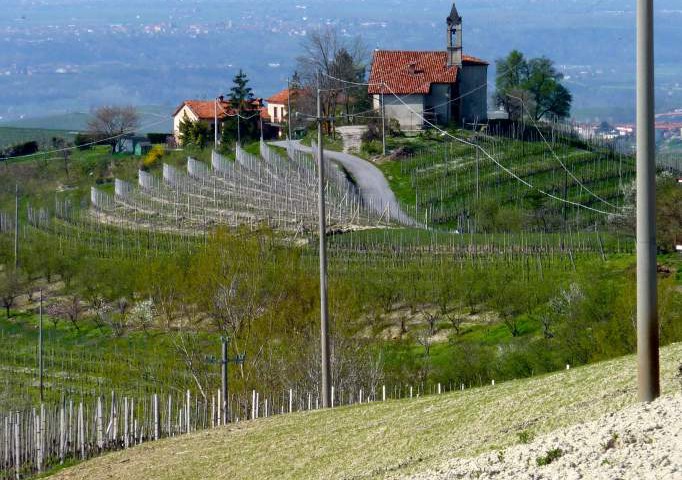 We now leave the village of Clavesana, and from here on the road is all uphill. We reach the hamlet of Sbaranzo, where a plaque commemorates 17 partisans who were killed on the 3rd of August 1945.

We continue to climb, going passed the crossroads that had initially brought us to Surie. In a few km we reach, once again, the road that leads towards Murazzano.

Partisan pedaling #2 on bike from Murazzano to Clavesana

The Castle of Caldera

The parish church of saint Nicholas

The sanctuary of Madonna dei Monti

One of the main towns in the Langhe. Its height (739 meters over sea level), its closeness to the Maritme Alps and its meadows give it an unusual mountain appearance.