Minetto nougat began as a secondary artery in the life of Carlo Minetto, a winemaker at a winery in Santo Stefano Belbo from 1976 to 2014, and a resident of Pezzolo Valle Uzzone where his artisan workshop also resides.

From hobby to profession

Since 2000 he has dedicated himself professionally to both wine and nougat; he had approached the latter years before, but only as a hobby.

A hobby that has led to the production of nougat that has crossed regional, state and then continental borders, arriving to delight palates as far as the Americas.

An interweaving of laborious and sometimes difficult trades, as the harvest season, that of Moscato in September, coincides with the beginning of the nougat “season” in preparation for the Christmas holidays.

Compared to an industrial-type production, the artisanal production of Minetto nougat is very long, up to eight hours: processing begins around 7 a.m. and ends at vespers, 6 p.m.

Baking is in fact done in a bain-marie and not by dry steam.

The wafer-covered forms are then composed, cut and immediately packaged with transparent film, heat-sealed and shrink-wrapped since the cake is susceptible to temperature and humidity: the risk is that the dough will become soft.

It is finally stored in cold storage at a temperature condition of 7-8 degrees.

The preservation methods used best preserve the quality of the product

Food-grade plastic packaging, the only viable alternative to date that allows nougat not to come into contact with air and moisture, does not alter the taste in any way.

It has a long shelf life, up to one year, as nougat is a very sweet product and does not risk the establishment of mold.

A small workshop for a great product and... a pig!

The story of Torrone Minetto has an unusual beginning; it traces back to an animal, a mammal to be precise: a pig.

In the early 1980s, in fact, from Piana Crixia, in the province of Savona, over the hill from Mr. Carlo's house, a family friend arrives to kill the pig and make salami from it.

He arrives late, however, around 9 a.m., since he was making nougat for the annual and historic festival held right in Piana Crixia.

Carlo, who has always been curious about the methods put in place to produce this sweet, seizes the opportunity and then requests the recipe to finally attempt to reproduce it.

His friend, however, aware of the initial difficulty and the length of the procedures, offers to help him along with other acquaintances the next day. And so it goes.

From that day on, Carlo, once a year, does his best to make it and over time refines the technique.

If at the beginning it was a product generated very artisanally, on the stove in a bain-marie, and it was consumed within the family and made to taste to friends, for Carlo it then takes on more and more relevance so much so that he builds himself a first baking machine to minimize cooking time.

To make nougat in fact, it is necessary to cook the beaten egg whites and honey, continuing to stir and mix the mixture for hours, causing it to harden.

The baker then comes to the rescue: a vessel in which a rotating paddle stirs the mixture in a bain-marie, so that the cake cooks but never comes into excessive contact with the flame. The consequence would otherwise be a darker coloring of the nougat.

It is the dawn of the year 2000 and Mr. Minetto decides to renovate his house also in function of this sweet, which by now pleasantly clutters an important place in his occupations and needs, in return, also a counterpart in physical space.

Thus, the workshop of the famous Minetto nougat was officially born.

The fruit of this work pleases, satisfies the creator and customers. Mr. Carlo designs and has assembled a new cooker of adequate size that allows the preparation of 40 kilograms of compound per day. A choice that results in great savings since it is a very expensive piece of machinery.

The equipment is still in use now, after 22 years, a symptom of how well it was conceived.

The success of the dedication, the desire of and in making, is sanctioned and sealed by the arrival of Minetto nougat in Via Montenapoleone in Milan, in several countries in Europe and in Canada. Without any fair, by means of word of mouth alone.

Coming to the present day, Mr. Carlo at the end of 2019 begins to mature the intention to close the business. Not because of a decrease in turnover, but because for him, who has now completed a large number of doughs, the work begins to be too demanding.

This is how his daughter comes in, who prevents the sale of the baker, the symbolic object of this journey, and in time of pandemic takes the reins and the baton of her father's work and a part of the kernels in free usufruct.

Torrone Minetto Quality of craftsmanship — A story that begins in 1980

The ingredients of Minetto’s handcrafted nougat are few, but all carefully selected:

Minetto nougat is indeed special because of the painstaking care devoted to its preparation in the small workshop and the meticulous choice of products.

The honey must be very fine, clear acacia honey. Other types of honey do not possess the appropriate characteristics as they are either too bitter or unsuitable for the opalescent coloring you want to give the product.

Honey gives nougat an irreplaceable roundness: this is why Mr. Carlo is determined, despite the inevitable increase in costs, not to replace it with sugar, despite the fact that in recent years there has been a shortage of honey due to climate change.

Hazelnuts, a nodal and irreplaceable note, are also essential. If one stops inside the Minetto workshop, the importance of this fruit emerges explicitly: looking through the mosquito nets on the window panes, one can immediately distinguish the wavy outline of the branches of the hazelnut trees that also try to penetrate the farm.

Hazelnut groves that turn 45 years old and generate fruit that has formed well with the passage of the many seasons that their roots have absorbed.

The hazelnuts are then shelled and vacuum-packed for use at multiple times.

No natural flavors or various additives, although allowed, are added. 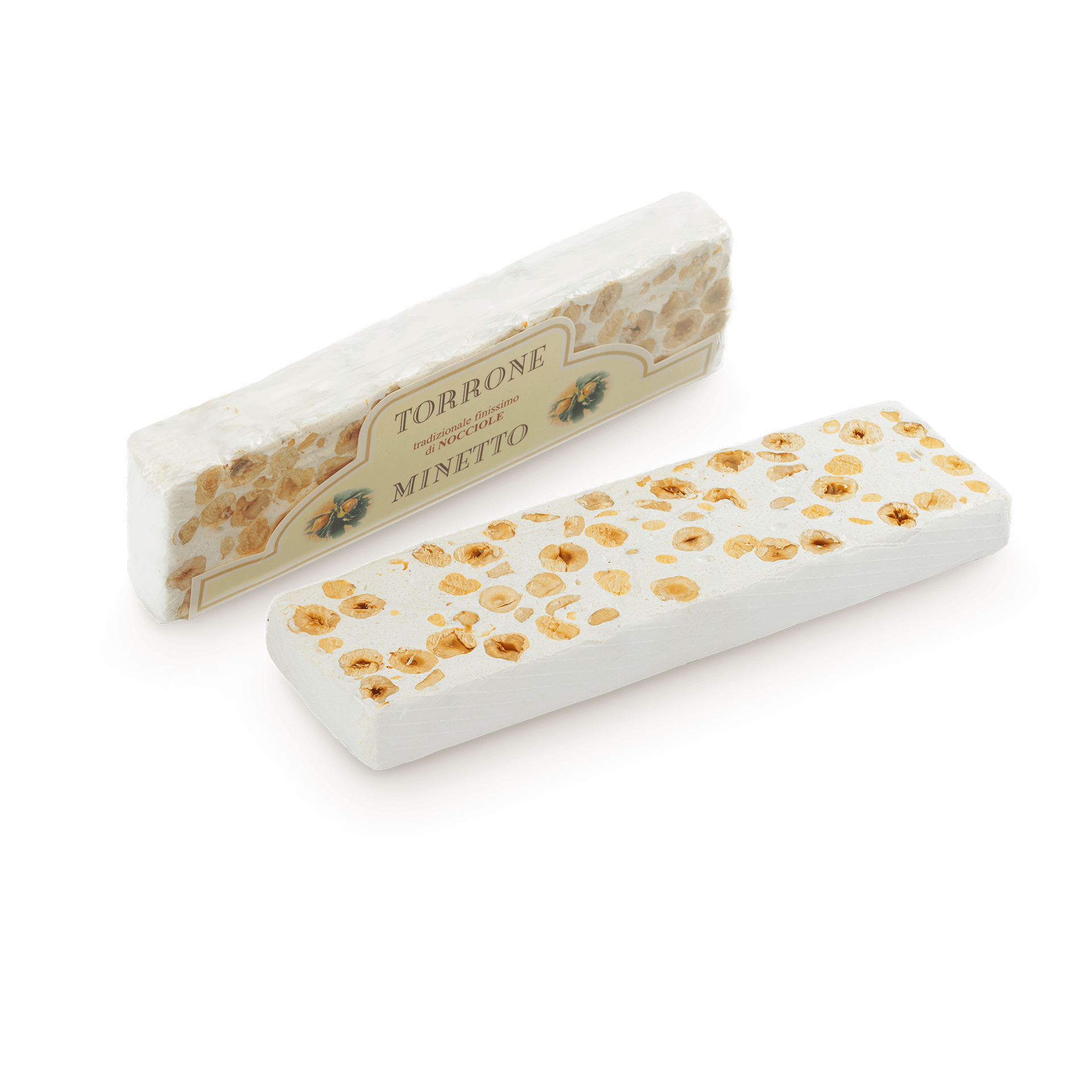 All children in the 1980s waited for nougat when daddy came home, as all squares where there was a festival also hosted a nougat-maker as a matter of course. Long square pieces were displayed on the stalls, chosen the size the piece was broken, finally weighed and sold in flakes.
1
2
3
1. Mr. Minetto with his cooker.

Mr. Minetto’s cooker was self-designed and remained the same for 22 years

The village is located in the valley of the river Uzzone Pezzolo and is characterized by low, quiet and peaceful houses. Even the small village of Gorrino deserves a visit because it is gathered around the medieval castle.

Discover Pezzolo Valle Uzzone
✕
For information and reservations fill out the following form, you will be contacted as soon as possible

You will never receive spam and your address will be kept confidential.
We respect your privacy.
Write a Message