Here’s the first of a series of cycling-tourism routes linked to the places where the Resistance took place. At each stage we’ll encounter places that marked the partisan war of liberation or that recall its actions.

Ideally what I’d like to propose to those who’ll be traveling on these roads is to combine discovering the beauty of the locations with the knowledge of how the Resistance and the partisans lived and fought in every town and hills of the Langhe, not only in Alba or Cuneo.

These itineraries, between 30 and 50 km long, were created for cycling and are feasible both with a MTB or road bike.

This first itinerary starts and finishes in Dogliani, thus closing a ring that reaches Bossolasco and Bonvicino.

It’s roughly 35 km long and isn’t particularly difficult. However about 70% of the route is uphill, with a 500 meter difference in height, at its highest point, than that of Dogliani. Since most of the path is at around 600 meters in height, it can be easily tackled even during summer.

The start is from Dogliani

We leave the village of  Dogliani following the signs for Somano and Bossolasco. The road begins to climb regularly, and the first 6 km are quite shady.

First stop is in Somano

We continue to climb and reach Somano.  Upon leaving the town downhill, we see a sign on the left indicating the detour for Colle Garombo. This is where, in the early days of 1945, the partisans of Justice and Freedom of the “Monte-Bram Brigata valle Grana” group took up quarters. The brigade had come from the plains under the command of Giannetto Asteggiano.

A group of the French partisan “Lulù“, Luis Chabas, the legendary Scarlet Pimpernel from the Langhe, had one of its bases in Somano. He died by mistake at the hands of a JF patrol that had just arrived from the plains.

Cohabitation in this area of Langa between the Garibaldini and the JF brigade wasn’t without rivalry and tensions, but it also saw many common actions by the two groups. Following the detour near the sign, via a paved road we reach Pian Garombo, where we find a multipurpose facility which is still used for celebrations and gatherings related to the Resistance. 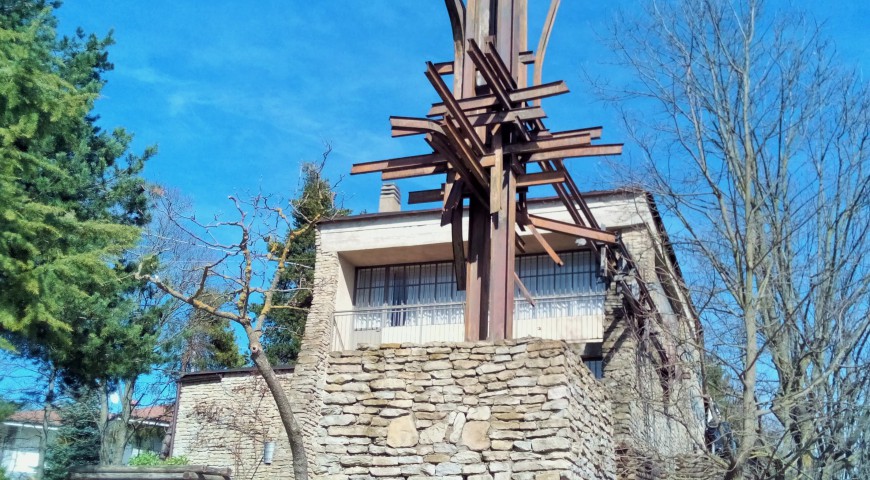 The Resistance Park in Bossolasco

Further down the paved road, we reach provincial road n. 56 which goes uphill and offers a magnificent view of the mountains and the plains below. We then arrive in Bossolasco, renowned as one of the centers of production of the Tonda Gentile delle Langhe hazelnut.

Before entering the town, on the left, we go up to the Resistance Park, and we ’re greeted by a tombstone that reads “Here live forever the eyes that were closed to light so that all could forever have their eyes open to the light“, a phrase by Ungaretti composed specially for the park.

Despite being rather small, it is a place that brings the visitor to become estranged from the surrounding environment, ideal for a moment of reflection and rest.

We leave the town and follow the signs to Murazzano. Once the descent begins, we come across the intersection at the summit which allows us to go down on the left towards the valley of Belbo, or on the right to Bonvicino. Following the road we reach the town, and after circa 2 km along the PR n.32 we encounter a monument with a plaque in memory of a few peasants killed by the Fascists in 1944.

It’s interesting to note that often the retaliation towards the Nazi-Fascists involved entire families who lived in the same farmsteads, and this explains the presence of several victims with the same surname yet at different ages, often even adolescents as in this case.

This confirms the criminal brutality of the reprisals; Giuseppe Masante and Carlo Occelli were killed simply because they were witnesses of a previous massacre involving six men who were cutting wood. 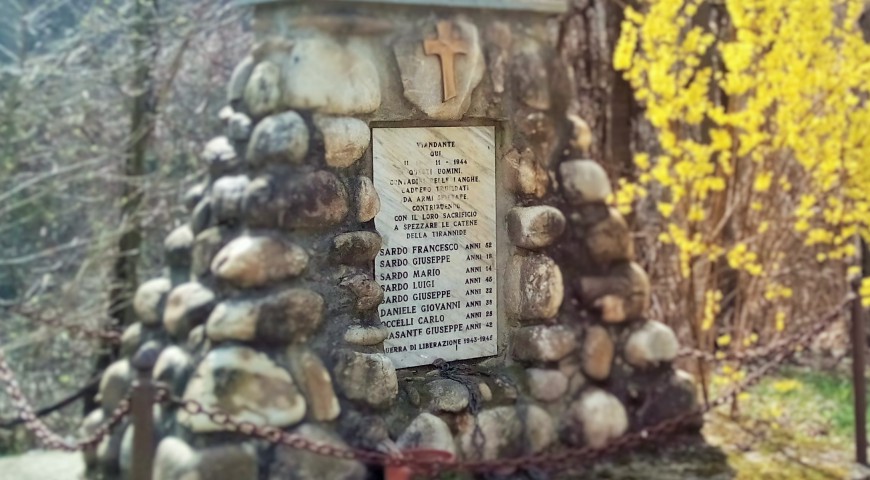 Continuing the descent we cross the PR 56, which in just a few minutes takes us back to Dogliani.

The parish church of saint Lucy

Capital of the south-western Langhe and a bridge between the Barolo Langa and the Alta Langa, Dogliani is rich in history and characterized by a curious architecture. The town is known for its excellent wines and gives its name to the DOC of the famous Dolcetto.