When we parted, after our visit to the historic town of Fontanafredda, I promised you I’d have a surprise for our last encounter. In fact here it is; after Alba, will also be visiting Bra. A city which today is no longer producing wine, however in the past it may have been the true center of Barolo wine production.

In Alba: the Calissano Company

In Alba, the Calissano company, founded in 1875, was among the largest producers of Barolo at the turn of the century. Nothing is left of the once beautiful courtyard where entire generations of wine and spumante (sparkling wine) makers produced the best wines in the Alba area.

In the 90s, after several changes of ownership, everything was demolished and now a modern building houses offices and banks. A classic example of non-recovery of a historic industrial building; a cultural loss for the entire city of Alba and for all wine lovers.

Was Bra the real center of Barolo wine production? 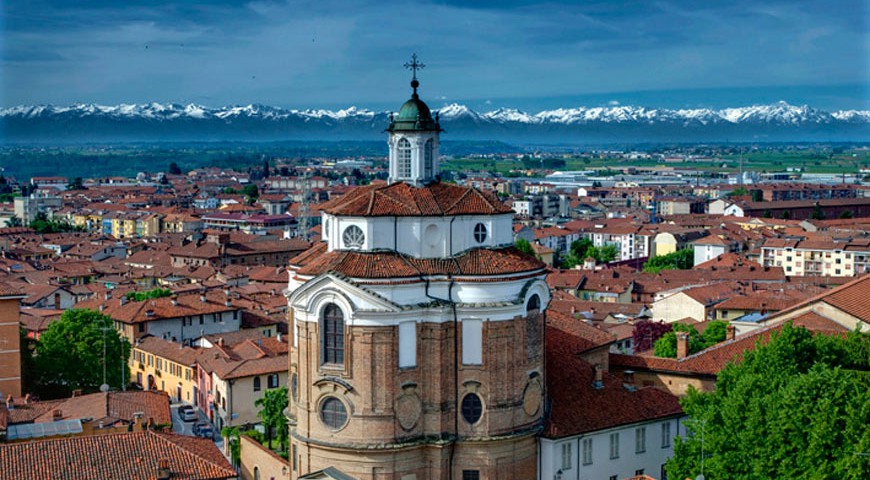 Bra, in the nineteenth century, was the main center of production of Barolo wine. It wasn’t by chance that in Vienna, during the 1873 International Exhibition, the Barolo wine from the Fissore winery in Bra triumphed with the gold medal.

There were other wineries however, in this small town: Manissero, Boglione, Bonardi and Ternavasio according to the “Guide of Bra and surroundings” dated 1875. The “Matteo Cav. Fissore e figlio” winery was founded in 1859 in Via Vittorio Emanuele II 66, and soon became an important and prestigious Barolo label during the last century.

The winery bought grapes from the best Langa locations and produced the classic red Piedmont wines, but their wine list also consisted of Gavi, Brachetto and Vermouth as well as “Barolino Chinato” and the “Gran Vino Barolo”.

It closed down after three generations in 1950. Today the building is a simple condominium. Manissero too, an important grape dealer in the nineteenth century, closed down in the 1920s. Its lovely building and garden is now used as a dwelling.

The Ascheri family in Bra

The great wine-making tradition in Bra was preserved only by the Giacomo Ascheri company; it is the only producer left that is still making the finest Piedmont wines. The Ascheri Family has ancient origins: quoted as Ascherius in the town of Alba “Rigestum” in 1196.

They were from La Morra and in 1880 Giacomo Ascheri moved to Bra in via Piumatti 19, where he began producing Barolo wine. In 1960 the wine cellars were expanded, renovated and moved a few meters from their original location.

After intelligently restoring some of the old wine cellars in 1994, the Ascheri Family opened the ”Osteria Muri Vecchi” restaurant; a meeting place where traditional cuisine and local wines become elements of conviviality, culture and sociability.

In the city of Bra we can still see the Russi wine cellars or rather the grotto belonging to Giovanni Battista Ternavasio, a general in the Napoleonic army who was decorated for the Russian campaign. After his discharge, in 1820, he founded the Ternavasio winery in Bra. He purchased a building from a religious order and turned it into a winery, which actually remained open until 1917.

Today, it has become a condo. His fame however is still linked to the so-called “grotta del Russi“; an impressive series of tunnels under the wine cellar which he had dug up for promotional purposes. I was able to visit the grotto in 1992, in part thanks to the kindness of Matteo Ascheri, and I can say without a doubt that it was definitely one of the finest achievements in the wine industry.

Based on French examples – galleries in Champagne – and on a project by architect Onofrio from Turin, it consisted of a large circular hall over 20 meters wide, supported by sixteen beautiful columns, which led to four, six meter high galleries that ended with an eight meter diameter room; each of which were linked by external circular tunnels.

The grotto could store roughly 400,000 bottles in holes made in the walls. Special chandeliers and lamps illuminated the grotto’s promotional itinerary which was rather unique for its time.

Worth mentioning are a couple of important visitors such as the Czar Nicholas II and King Vittorio Emanuele III. In 1917, after the Ternavasio company closed down, the grotto fell into disuse.

It became a refuge for partisans during the resistance, a salt deposit during the post-war period and was damaged in 1972 due to work carried out on the surrounding buildings. Today for safety reasons it is inaccessible and in a total state of disrepair.

Over time it will inevitably collapse. In 1904 a grandiose “Son et Lumiere” performance took place, with a scenery of 400,000 bottles of Barolo, to welcome the Italian Royal Family and the Czar.

The decline of Bra

Why did Bra lose its entrepreneurial role in the wine industry? Probably the first difficulties arose with the 1930s crisis, the Mirafiore and Calissano bankruptcies in Alba and the closure, in the province, of the rural banks of Catholic inspiration.

The postwar period saw Bra and its territory radically change. Other industries and activities emerged; the agricultural sector, including viticulture, were marginal activities in the context of the national political and economic choices made.

The wine quality consumption left a lot to be desired, the first DOC wines were still in the pipeline waiting to be discussed. Little by little all the wineries closed, except for Ascheri. During that period the local institutions and municipal administrations also lacked territorial sensitivity. The historic firm Bianchi (producer of vermouth and spirits) with its beautiful liberty-style plant and marvelously original production facilities, closed down as well.

Why wasn’t any of this saved? Was conservative restoration work, along the Fiat-Lingotto style, impossible? Was it so difficult to create a museum of places and memory to pass on as tradition and to pay dutiful gratitude to those wineries and entrepreneurs from Bra which, during the last century, were the pioneers of the commercial enhancement of the Barolo wine in all markets around the world?

The importance of the conservation of locations and the memory of a wine is a well known fact; the benefits for the entire territory, and for those working in the wine industry, are huge. What remains of the image of a great wine without its history? Its traditions? Its landscape?

The recovery of the Chartrons district in Bordeaux on the banks of the Garonne river, home of great wineries, was an authentic cultural operation by politicians and businessmen, that received international attention even at the Centre Pompidou in Paris.

The same can be said of preservation, in the form of a national monument, of the winery buildings of Groot Constantia in South Africa; yet the homonymous and famous dessert wine is only a memory of the nineteenth century.

There’s still quite a lot to discover about the Barolo wine; a wine that still needs to be studied and of course, enhanced. Is a research project and cultural-historical safeguarding of this wine, by both public and private bodies, really impossible?