Langhe is more than just Barolo and Barbaresco. Bastia, which finds itself closer to the lesser known Monregalese area, is technically still Langhe and is included in the Dolcetto di Dogliani designated area.

Much more rural, it reminded me of some scarcely populated hamlets up in the Alpine valleys. This made me even more curious to explore this remote area and its wines. Bricco del Cucù, a recent “tre bicchieri Gambero Rosso” award winner was my destination.

I was greeted by an elderly Italian woman at the gate, the daughter in the courtyard, and then brought to the picnic table for a tasting with the youngest generation Chiara.

She presented their whole range of wines to me: one white and five reds, all either pure varietals of Dolcetto or blends. I was excited to delve into the wines and equally so, the local treats her mom brought out for me! 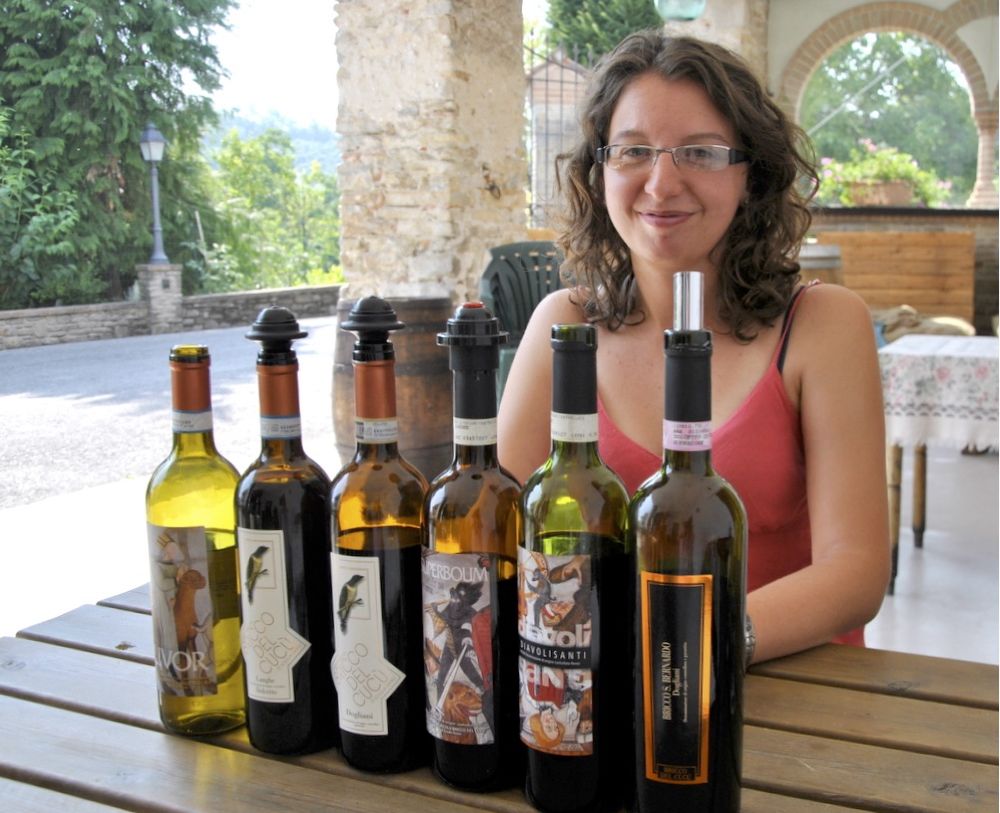 Chiara with the wines

Dolcetto is thought of as quite a simple straightforward wine. So how can there possibly be all these different types coming from just one winery?

Every day wine. Light, fruity with a slightly bitter aftertaste. Only 12.5% alcohol. What a dolcetto should be.

Blend 70% Dolcetto and 30% Merlot. Very spicy, rich bouquet, round medium bodied. No oak. A different label representing one of the 7 deadly sins depicted in the local church, pride. There is nothing wrong with having much deserved pride for this wine, let me assure you!

Blend 60% Dolcetto and 40% Merlot. Plums, dark fruit, spice, full bodied, refined tannins, long finish. The Merlot interestingly ages for 18 months in used barrique while the Dolcetto ages in big traditional barrels or botti. They are blended together and left to bottle age for another 18 months! Very interesting process and very good! The label depicts the frescoes in the church as well.

Pure Dolcetto coming from a single vineyard of 50 year old vines. The altitude is an impressive 530 meters and infact you can see an amazing panorama from the vineyard site up at the church where they lie. To be Superiore the Dolcetto must be aged for at least 1 year. Theirs is aged in oak for 18 months and bottle aged for another 18! In fact I tasted the 2008 vintage which was superb! Nose was spicy, peppery, meaty and savory. Important tannic structure with nice minerality and dried herbs on the nose and palate. Who says Dolcetto can’t age!?

As we sipped the wines, Chiara told me about their interesting family stories with such an admirable humility. Her father started bottling wines in the 90s because he wanted to do more than just sell grapes like his father did.

The name of the winery comes from Bricco which is the name of the hamlet and also means top of the hill and CuCù because there is a 100 year old oak tree sitting in their vineyard. Every spring the Cucu bird comes to visit and sing for the family before it continues migrating.

They produce 50,000 bottles and export small quantities around the world. Chiara expressed a bit of her frustation of living in such a rural area, a common struggle with new generations. She dreams big of living in England and was actually able to spend some time there during her studies.

If she carries on the family business, she will definitely take care of the marketing side while her younger sister will do the farming. As we were tasting together, her younger sister came driving through the courtyard on the tractor with determination!

As if it were nothing, we then toured the mini cellar and vinification area. It looked like a museum! In fact, it could have been. They had amazing big barrels, all very old and when I asked when this building was constructed, she non-chalantly mentioned the 1600s! 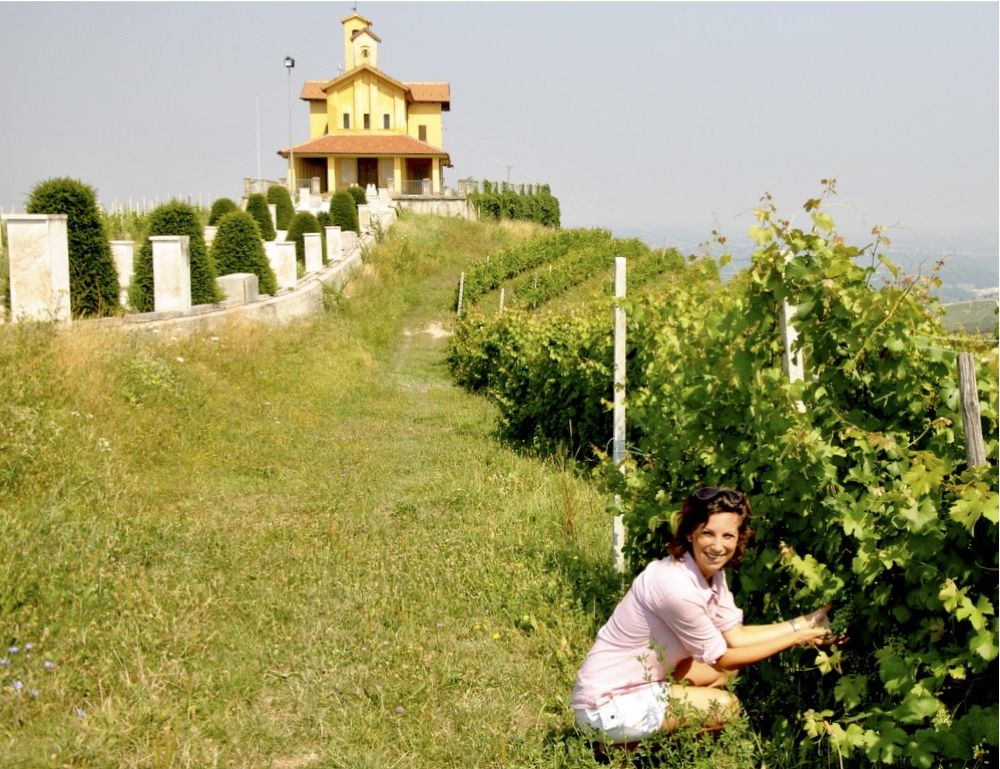 Their oldest vineyard San Bernardo is located alongside the “grand” entrance of the San Bernardo church, dedicated to the partisan soldiers. Too bad for the muggy day, otherwise we would have been able to see a stunning view of the Alps and the underlying valley on one side and Langhe on the other side.

Chiara’s mother is a volonteer for the amazing church San Fiorenzo which is also located in this tiny town of Bastia. It’s noteworthiness is due to its position along the via del sale or the “salt road” where pilgrims could take a much needed rest.

It may even date back to 1472. Normally this treasure is only open to the public except for Sundays, but I got a private tour because this family holds one of the keys!

Coincidentally, I was there for a concert just a few weeks ago but could have in no way understood the significance in the same way. The frescoes are vibrant and colorful, covering every inch of the interior walls. Part of the artwork depicts the 7 deadly sins and the charity of God. Each sin is depicted by a symbolic character and animal as they walk into the devil’s mouth. The angels and apostles are also depicted on another wall.

Chiara even told me the coolest fact ever! When Napoleon’s troops came through and destroyed everything, they ruined the current frescoes but if you look closely, they actually revealed another style of fresco underneath which seems to be coming from the Byzantine era!

This visit to Bastia Mondovi opened my eyes to a whole new area of the Langhe that I had never thought of visiting before. There is so much to explore if you just get off the beaten path a bit.

A big thanks to this kind family for taking the time to broaden my horizons! I hope you get the chance to visit the Winery Bricco del Cucù.

7 Reasons Why Traveling Affects Your Health

Winter in Langhe: the history of food in peasant resilience