It’s difficult today to understand the concept of seasonal food. Obstacles to year-round availability have been overcome, and food supply is no longer linked to the cycle of sun and moon.

Freezing and preservation methods have replaced the ancient tricks in an efficient and unnatural way, but in the Langhe the knowledge survives and is passed on through generations.

It’s a land of peasants, of people whose lives were devoted to work. And food, especially in winter, had to be nutritious enough to give them the right energy intake.

The ingredients were few, and people were mainly surviving with what they raised or grew at home. This is how some of the most famous dishes of Langhe tradition have originated: from cleverness in difficult times.

In winter, pigs were slaughtered. The “massacrin“ went from house to house to complete the job, though some preferred to take care of it on their own.

There were no rules, but just like in every other field knowledge spread and traditions gradually developed.

Pigs were not the only animals to get this kind of treatment, but while only specific parts of these others were used, every part of the pig found a purpose. 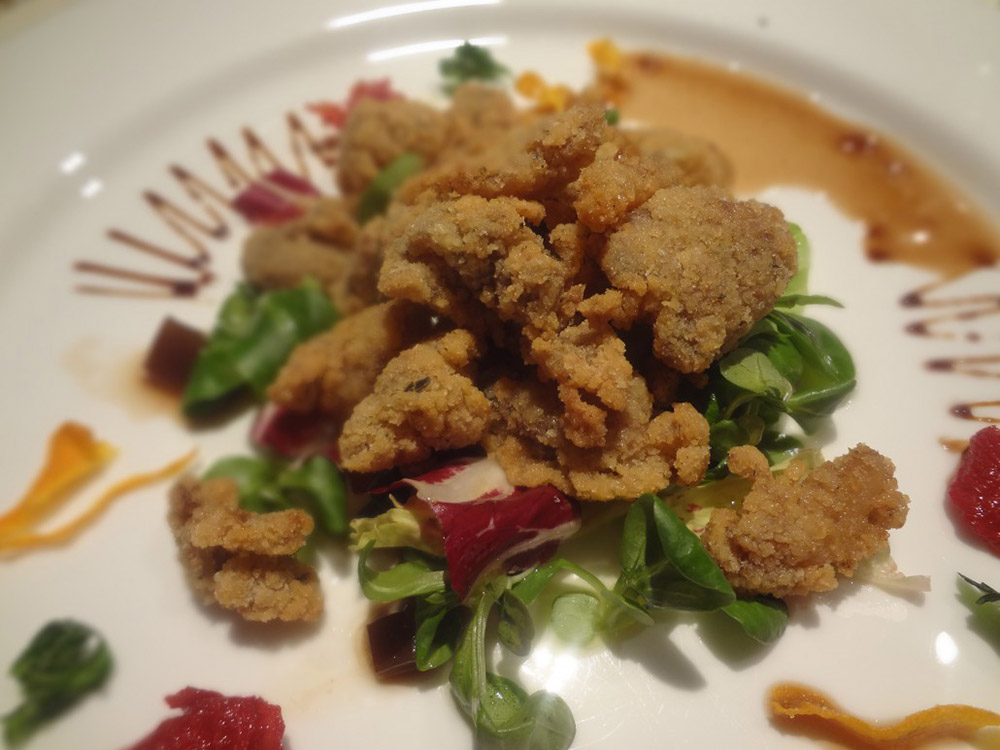 Head and ears were kept aside for the “orion” – a traditional soup made with garlic, anchovies and parsley – while the feet (batsoà) were eaten baked and fried in lard (oil was expensive and hard to find at the time).

Meat and salami represented the main sustenance for the cold season, while the liver, nutritionally too rich to be discarded, was added to the “trita” – raw minced meat – and some spices to make the beloved “Grive di Langa”.

Blood was not wasted either: the “torta sanguinaccia” (a pie made with pig blood) was in fact one of the most popular recipes in winter, made of only milk (or broth) and blood, with the occasional addition of some eggs to make it more filling.

Agnolotti del plin are perhaps the most widely known dish of the Langarola tradition. Tourists come from all over the world to appreciate them, served with no sauce on a napkin, with sugo d’arrosto (a sauce made from roast drippings) or with butter and sage. 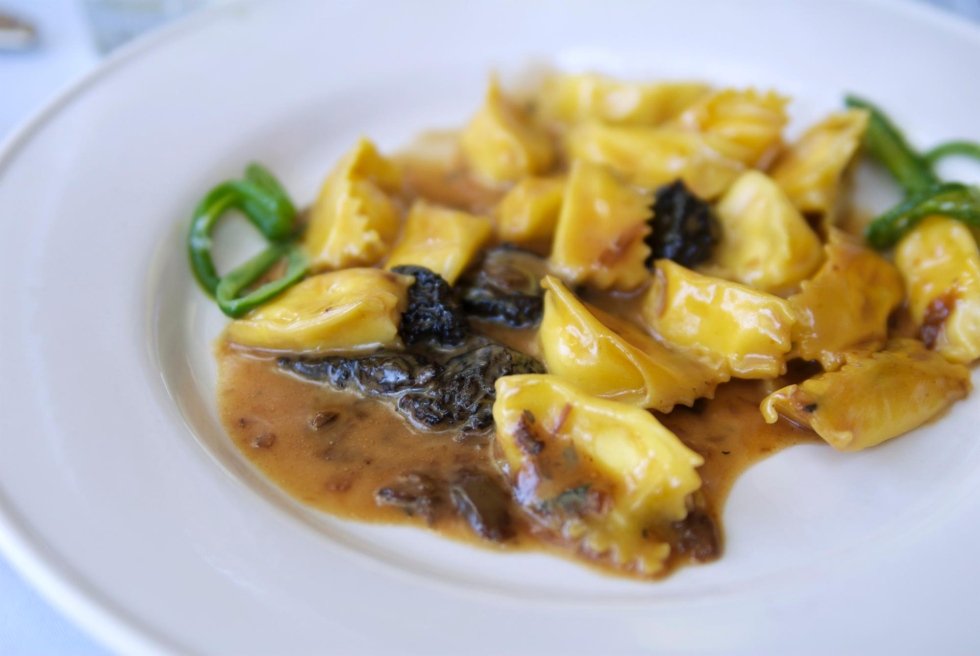 Unbeknownst to many, however, is that the plin are somewhat like Nebbiolo: they change characteristics in each valley.

In the long winters of the past, this dish was the pride of every wife, who guarded her family recipe as a treasure.

The fillings varied, as did the shape: they were made with veal, pork, rice, cabbage or boiled charb. Sometimes sage stood out, while others tasted more of onion.

In Alba they were categorically square, while further up in the surrounding hills the shape became more rectangular.

Those that today are served on the napkins were at that time intended for the elderly, the so-called “raviole cordonà”, which were eaten exclusively on a tablecloth woven by hand with a pronounced warp. They were typical of the Carnival period, served plain to better appreciate their delicacy.

Polenta was ubiquitous in the valleys of the Langhe during the cold and dark winter.

While the men were outside working, there was always a warm hearth in the farmhouses, with a large pot stirred by a woman with infinite patience. 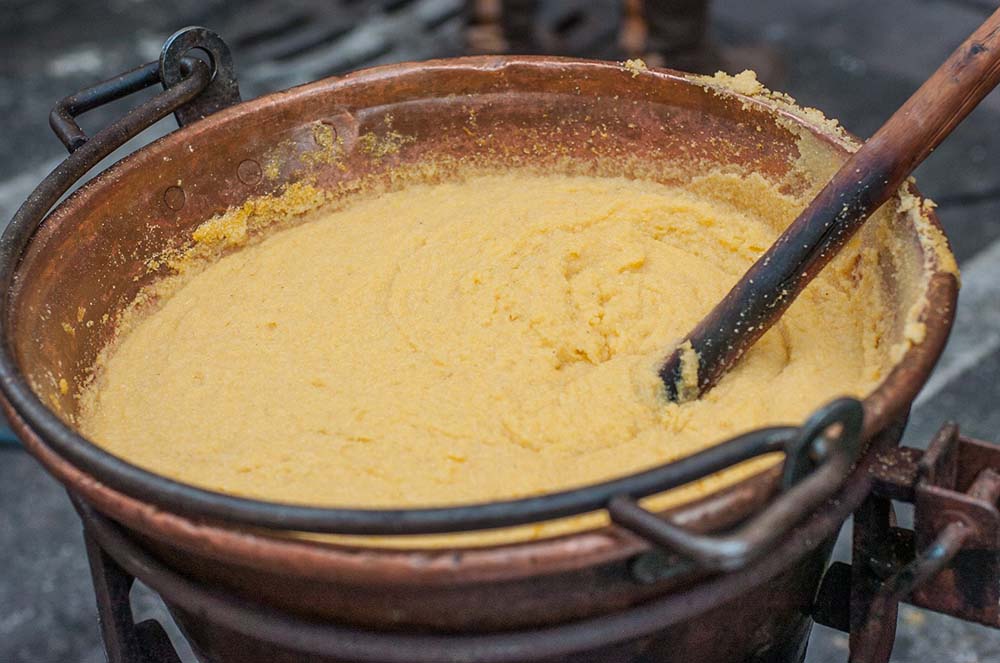 This dish was a must: warm, nutritious and reassuring, served with whatever was available.

In hard times it was eaten with milk, butter or ricotta cheese, often produced at home, while special occasions warranted bringing out the ragù, the boiled meat or the stew.

Each family slaughtered on average two animals a year, so in the villages the neighbors took turns providing and then everyone shared.

Fish was another option for pairing with polenta in the Langarola tradition: anchovies on common days, cheap and easily available, and cod “al verde” (a sauce of garlic and parsley) on festive occasions.

One of the most popular sauces was the “bagna d’ infern”, with garlic, anchovies, tomatoes, chili peppers and hard-boiled eggs.

Truth is, winter was a time of hunger. Food was scarce, the variety was limited. One had to make the most of what was available and each ingredient was exploited in every possible way.

The cultivation of chestnuts in Langhe dates back to ancient times – it is associated with Roman conquests – and has always been one of the main sources of energy in the hardest period of the year. 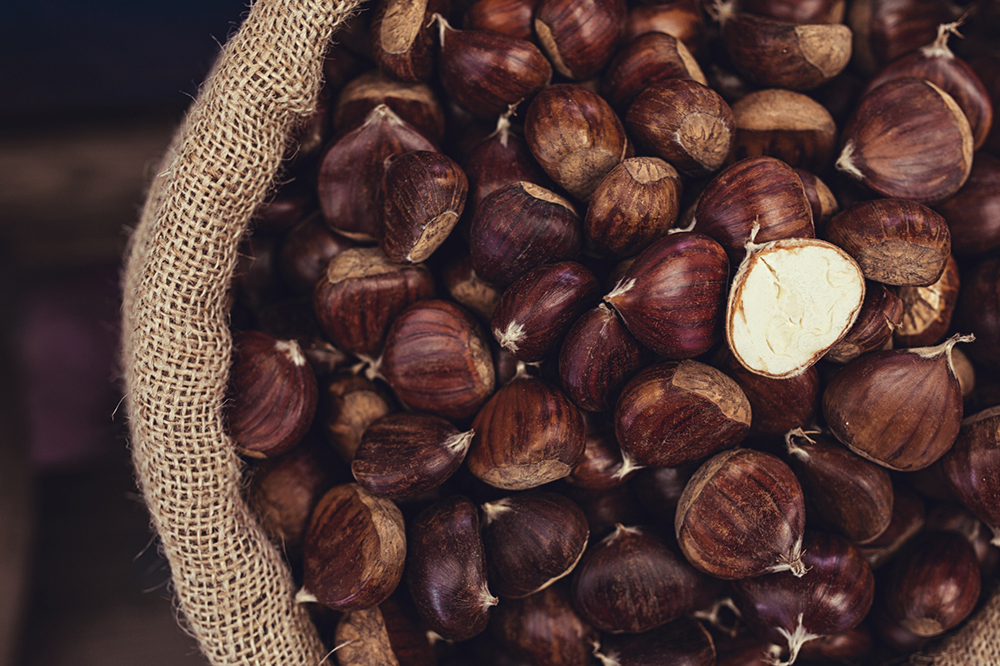 Some of the cultivars found today in the Langhe and Roero are found only here, thanks to the marked acidity of the soil.

The various products derived from this fruit were extremely nutritious and widely appreciated: roasted chestnuts, called “mondaj” in the local dialect, filled the streets in the months of December and January, while in the poorest families, when the food was scarce, bread was prepared with chestnut flour to make it more nutritious.