Looks of the dough

The dough is pale yellow. It is finely granular, and breaks in chips.

The first news about a then unnamed cheese have been found in documents of the year 1000, when the Cistercian Monks of Chiaravalle (near Milan) started a land reclamation that made possible forage cultivation and breeding of bovines. In the Middle Ages the problem with cheeses was that they couldn’t be preserved; so the medieval cheese-makers developed a particular technique to increase their preservation: this is how Grana was born. From that moment we know about Grana making near the Po river, the Ticino, the Adda; in the XIII century Benvenuto from Imola described it as “the longest-lasting and resisting to diseases”.In 1477 Pantaleone from Confienza described Grana from Piacenza as the gratest Italian cheese. 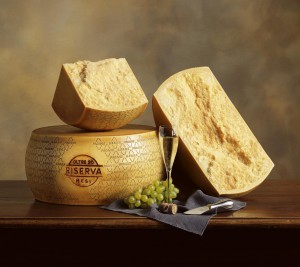 Once the makers made two makes a day; now there usually is only one. It is made with cow’s half-fat milk, skimmed and put in big copper boilers, where serum and technological coadjuvant (lisozime) are added.Then the dugh is warmed up to 32° C and rennet is added. After 20-30 minutes the curd is broken with a thorn in pieces as big as a rice grain, and the mix is cooked at 55° C. The pieces that stick to the bottom of the boiler are gathered and put under a weight.After being turned around some times, the moulds are pickled for around 20 days.The seasoning lasts at least 12 months (after nine months the cheese is beaten, and if it has the required characteristics, marked).

Fragrant, intense and delicate flavora due to the long seasoning, that remember milk, forage and toasted. In the mouth it feels friable and granular, its taste is intense and balanced thanks to the actively degrading proteins.

How to eat it

Alone in dishes or grated on pasta and other.