Aside from being a picturesque city of arts and studies, situated near the Langhe and the Alps, Mondovì is also somewhat peculiar: it is distributed on several levels. At the top, we find the Piazza district, 559 meters ASL on the hill known as Monte Regale, the original core of the city, while located at the bottom are the Breo, Ferrone, Plateau, Carassone and Borgato districts, along the Ellero river, a tributary of the Tanaro.

Why link the two souls of a city?

In 1886, as a result of the difficult connections between the Breo Commercial Quarter and the Piazza District, the first steam plant capable of connecting the two areas of the city was built. The study of the project was entrusted to Alessandro Ferretti (1851-1930), who created some of the first funicular railways built in Italy.

Ferretti, was an expert in engineering, aerodynamics and hydraulics, but his main activity was in the field of mountain railways and funicular cable cars. Building the funicular cable cars was commissioned to the Borghese blacksmith and the mechanics to the Manfredi company.

Things weren’t easy during the building phase and indeed they weren’t after either, especially for security reasons.

One of the problems they came across right away was that an inadequate braking system had been designed. In fact, during a test run a cable car sped into another cable car destroying better part of the lower station. Soon after the steam system was replaced with a counterweight water system: when a cable car went up the other  came down.

At the high station in Mondovì Piazza the cable car tanks full of water worked as a counterweight thus pulling the other cable car which had empty tanks and was therefore lighter.

However, this always created a problem on arrival at the Breo station: since the cable car’s tank was empty on arrival, the system had to slow down, if not stop altogether. The first replacement of the cable cars took place in 1923 and the next step, the most important, was replacing the counterweight water system with electric traction, which took place in December 1926.

No more long waits, the Mondovì funicular rail car could now work at full capacity, without interruptions. In 1941 the entire cable car railway was modernized by installing a more powerful engine. This date also marks the introduction of the last generation of the blue funicular cable cars. 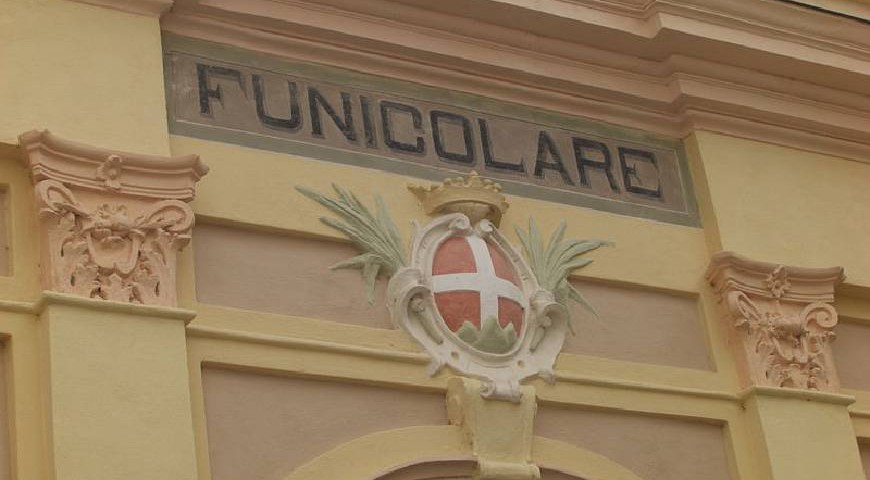 On October 4, 1975 the funicular railway concession to the Società per le Opere Pubbliche expired and was passed on to the City of Mondovì. The funicular however needed modernization work to adapt to new safety regulations, but the costs were too high and was considered as being “inconvenient” and thus was permanently stopped. The connection between Piazza and the Breo station stopped in the same year.

The 2006 funicular and Giugiaro’s design

It wasn’t until January 2005 that work began on the Mondovì funicular for the removal and demolition of the old structure and the transformation of the Breo and Piazza stations.

Work began on the construction of the new winch and electromechanical equipment at the Doppelmayr Italia, a Tyrolean company, factory plant. The assembly work on the structure located under the Piazza station was spectacular: in order to  place the 5 ton winches, the engine and the plants, a special entrance had to be created from Piazza Maggiore.

The Austrian company Carvatech built the new cable cars based on a project by Italian designer Giorgetto Giugiaro: spacious cabins with large windows, a sleek and modern line, and long as a 60 seater bus. The special feature, however, was the lack of seats: passengers travelled standing up, with the exception of a few reclining stools.

Giugiaro’s name for this project wasn’t accidental: the designer was born in 1938, in Garessio, in the province of Cuneo, a town located roughly 45 km from Mondovì. To ensure the safety of passengers, protective plexigass was mounted; similar to double doors capable of preventing pedestrians from falling down off the platform: a successful solution that had already been adopted by several underground lines.

The new cable cars’ line was definitely cutting edge and modern. The monregalesi, or rather the inhabitants of Mondovì, sometimes called mondoviti, did not entirely abandon their memory of the past: the Breo station, in fact, retained its restored nineteenth century portal with the statue of the Madonna placed in the niche above.

On December 16, 2006, the funicular was launched. The stations and route didn’t changed. There was now, however, only a single track and the cable cars exchange in the central part of the railway.

Nowadays a cable car leaves every 10 minutes. Whether going up or downs the ride is smooth and quiet. And of course the Langhe Mondovì panorama is simply spectacular.

What does the Mondovì funicular represent today?

Mondovì, a town rich in art, history and studies. It has a scenic position near the Langhe and Alpi and its highest part (Piazza) is surrounded by medieval walls.