Historical re-enactments and the

Truffle Fair are the two most important events for the Alba townsfolk and tourists alike.

Don’t miss our interview with Alberto Cirio, president of the Giostra delle Cento Torri, and Carlo Passone, another key figure of the Giostra.

You’ll find a lot of interesting info that will make you appreciate even more this unmissable autumn event.

When did the Palio degli Asini begin and who launched it?

PASSONE: The Palio degli Asini began in the late 1930s, more precisely around 1935-36. After the break between the two world wars, there were another two or three editions before it stopped again.

The Palio stems from an idea by Pinot Gallizio, who, having a character of culture and spirit, thought of mocking Asti’s horse race, by racing donkeys.

We could actually say that, indirectly, we too helped create one of the oldest historical events in Italy, because the first Palio was run by the Asti townsfolk in our city on August 10, 1275.

Gallizio had a brilliant idea. It may have seemed banal, but it helped launch an event that will no doubt last over time. 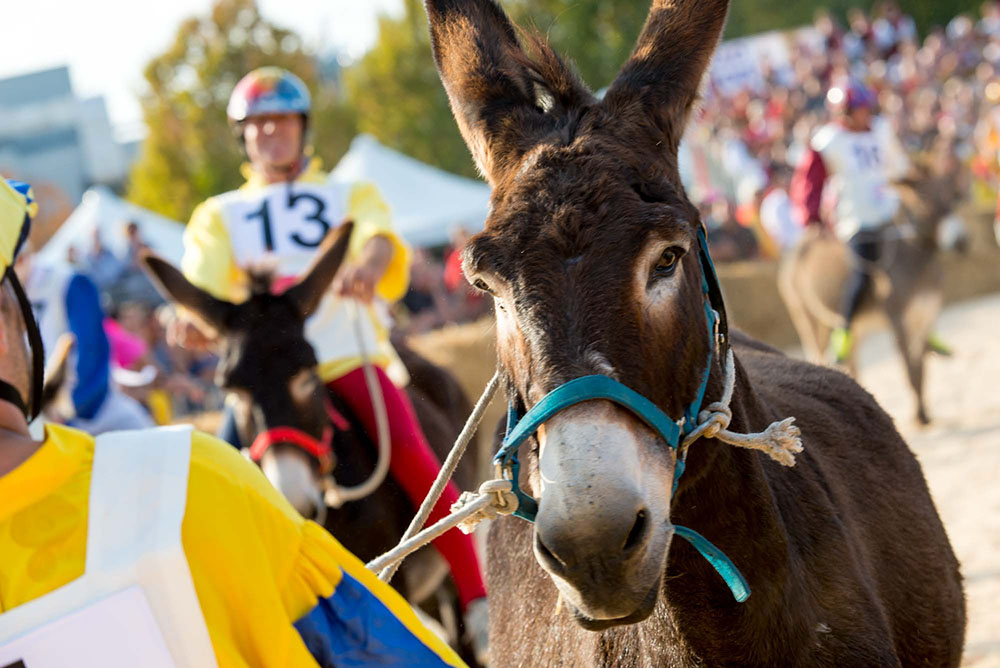 We mentioned that the Palio was suspended for a certain period: when was it resumed?

PASSONE: In 1967. This is the date of the modern Palio. It was resumed thanks to three people who really wanted it: Farinetti, Barbero and Aimeri.

Right away the three organizers decided to give added value to the event by linking to it the re-enactments of historical episodes, that make the Palio a part of history and legend.

Over the years, the other attractions linked to the Palio were invented, such as investiture of the Chief Magistrate and the medieval costume parade.

Today, the event continues to be followed precisely because theirs was a winning idea: people not only like coming to this farce race, but they also like the re-enactments with theater performances.

Why is the Palio today linked to the Truffle Fair?

PASSONE: The Palio has always been linked to the Fair: essentially it was created to give it a further image.

Furthermore, the Palio had a strong positive influence on the Fair because it helped get it back on its feet during a significant period of decline.

Thanks to the race, considered an absolute novelty, the Fair enjoyed a great flow of tourists, thus allowing economic recovery.

At a cultural level, what impact did the Fair and the Palio have on the community of Alba?

PASSONE: The Fair is the pride of all the Alba townsfolk, the world knows us for two things: Nutella and Truffles.

As for the Palio, however, our fellow citizens have never really appreciated it, considering it a sub-product, a folkloric event, but in a disparaging sense.

In the past, they couldn’t perceive the tourist potential that this race could have. The Palio was denigrated because it was considered useless and not only by the citizens, but also by the organizers themselves.

Furthermore, the donkey race was not considered culturally acceptable. But hats off to the person who had the idea of combining a historic event with some wholesome fun!

CIRIO: If the Palio was purely cultural, anyone coming today to see it would criticize it because of some historical inconsistencies.

If we were to rely on medieval costumes, for example, those participating in the re-enactment parade should wear cloth or wool rags: velvet, brocade and purple didn’t exist in the Middle Ages.

Yet a parade with those costumes would be a parade that the public would not appreciate today. 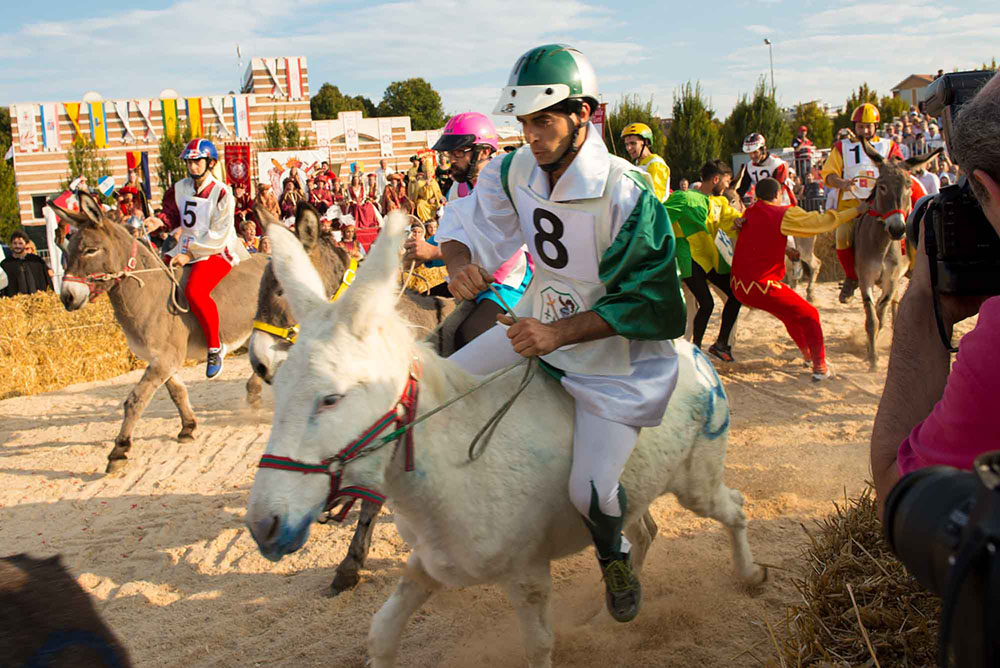 Despite the denigration, however, we know that the Palio is great fun: can you give us some anecdotes?

CIRIO: There are so many that’s it’s difficult to remember them all!

Anecdotes are deeply tied to the spirit that moved those who believed in the palio since its origins and then went on to manage and develop it.

Or rather pure amusement, the Palio was run for sheer fun. In the past everyone knew each other in Alba, there were fewer inhabitants. As a result, the various hamlets were made up of groups of friends.

The best anecdotes are the jokes that the hamlet members played on each other and almost all are related to thefts: they did everything possible to try to steal something from the opposing hamlets.

We too, from the Giostra, did our part in trying to “add fuel to the fire” by encouraging these episodes.

Here’s one: I remember that one night the Borgo Moretta hamlet stole a huge crossbow that the Borgo Brichet hamlet had put on display in Piazza Pertinace and was then to be brought to the Palio parade.

Someone discovered it was being stolen and went to get Musso who came out in his pajamas and began running after the thief but in doing so he ended up entering Borgo Moretta.

He lost his temper and began threatening everybody! And then, the usual blackmail: “we’ll give it back to you in exchange for wine and whatever…”.

And I can’t remember the number of times the Pali (banners) were stolen!

You mentioned the Giostra delle Cento Torri: what’s the relation with the hamlets?

CIRIO: The Giostra delle Cento Torri is made up of a folkloric group in its own right and uses the colors that distinguish the city of Alba: white and red.

The group is administered by Felice Dezzani, president of the historic group and there’s Vernei, the operations president who runs the organizational part and Dr. Passone who manages the communication and innovation aspects.

And there’s also Romano Cugnasco who organizes and runs the Palio in every detail and Giachino who deals with security, he was once part of Alba’s civil protection group.

The Giostra was created and has since been run in the same manner since the very beginning.

Its structure is like that of a classic municipal administration run by a town council.

The council is made up the president and a few collaborators; the board is represented by the council and all the Hamlet’s presidents. Every person has one vote.

The Giostra has an exceptional administrative council. There’s sixteen of us: nine Hamlet presidents (each representing a couple of hundred people), one from the Flag Throwing Group and six board members from the Giostra.

We sometimes argue and this usually happens when something new needs to be approved by the council. The arguing can sometimes be rather fierce and it’s only just because everyone wants to have their say. Generally though, novelties are always approved, sometimes with small variations.

If the presidents don’t argue, they don’t have fun. And we too form part of the administration; though we’re volunteers. 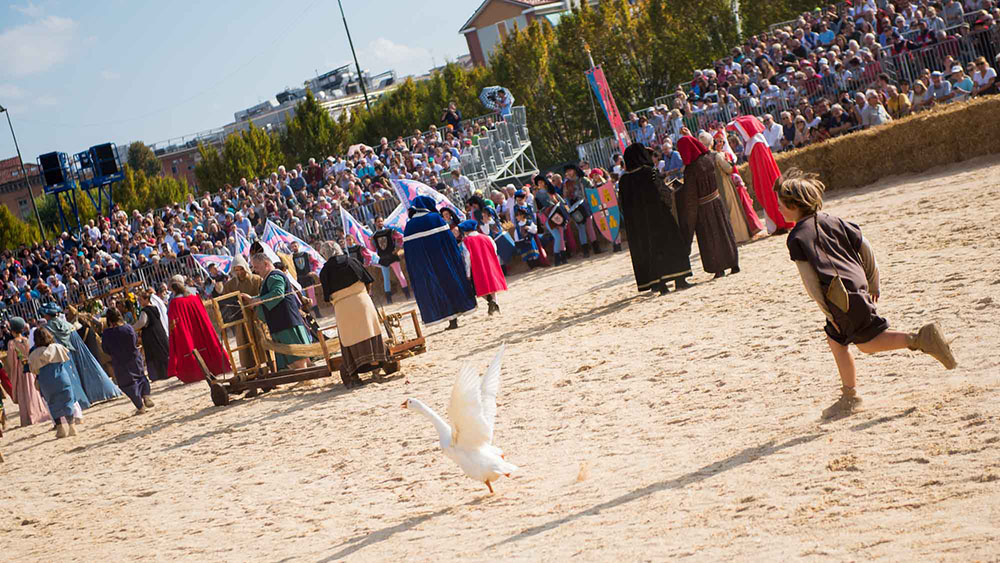 So basically how many are involved in the fair and how many tourists come out?

CIRIO: The number of volunteers related to the Fair involves at least 500 people: which is made up of those who take part in the parade and those who organize and deal with the various details: the dressmaker, the historian, the photographer and many others.

For the time being, the fair has not felt any crisis, unlike various associations (political parties, trade unions, municipal tourist board) which can’t find volunteers.

It’s different in the Hamlets: there are young presidents, historical figures (people who are over 80 years old) and constantly new volunteers.

The Alba people feel a great sense of belonging to their city, and this is why there are always a lot of people participating during the administrative meetings. It’s a nice sensation.

However, as for the number of people attending the Truffle Fair there are roughly 500,000 visitors, inclusive of citizens and tourists.

The Saints weekend, which is the longest, has the most number of visitors: 100,000 people visit Alba on Saturday and Sunday.

These figures involve all those who come to attend our events and come out for truffles.

Specifically speaking, however, how many tickets are sold each year for the Palio?

CIRIO: The Palio is sold out every year. We sell between 3,500 – 3,700 tickets. We sometimes see free seats in the stands because someone buys tickets and then doesn’t show up.

The general public increases considerably if we count all those who follow the parade from Piazza Ferrero. We reach an attendance of 7,000 people and it’s worth highlighting that the Palio is one of the least populated weekends due to the competition with people leaving to go to the beach and mountains and the lack of truffles. 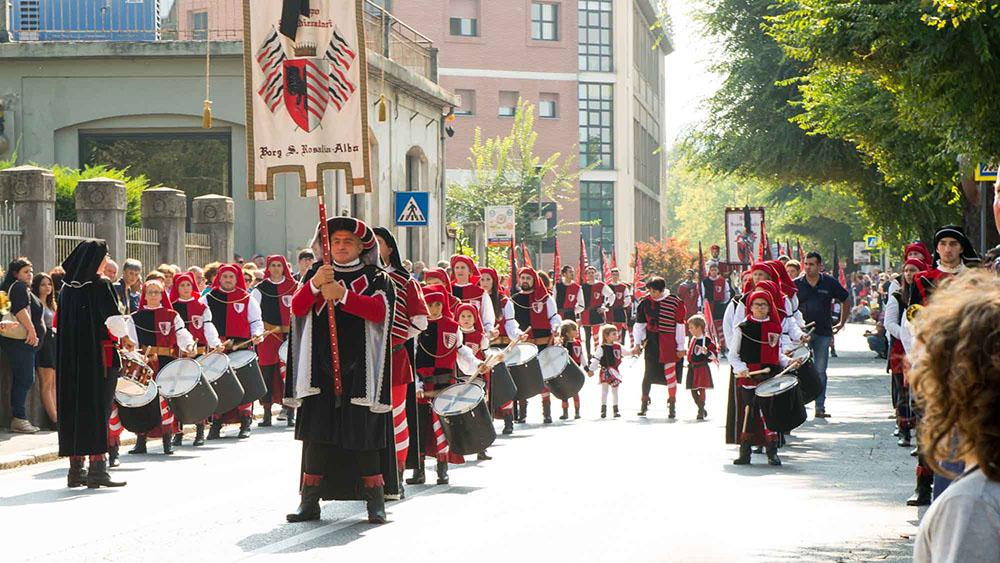 In the past, the Palio was held in the more scenic Piazza Duomo. Why was the location changed?

CIRIO: The main problem with holding the Palio in Piazza Duomo was security. That’s why we had to move it.

In addition, the Hamlets were dissatisfied because there was a lack of a “race effect” in that square: the donkeys, racing around the church, couldn’t be seen by the general public during the entire route.

In Piazza Duomo however it was quite nice, because the race was somewhat more spectacular.

PASSONE: Aside from this location, the Palio was also held in Piazza San Paolo, Piazza Monsignor Grassi, in the school courtyard and in Piazza Duomo.

Today it’s held in Piazza Medford which, despite being a less attractive location, because of the dispersion of space, remains among the most functional sites.

What are the issues the event has to deal with?

CIRIO: Considering the huge number of tourist coming to the Fair, one of the main problems is certainly linked to connecting Alba with other cities.

Those coming to the fair come by car (and in some ways that’s rather convenient, especially if the car has a large trunk!). Yet, all kidding aside, there’s no railway line and this prevents us from promoting the event outside our territory.

Today, transport means are at the forefront; there are metropolitan railways and high speed trains that take you straight to airports: it’s unacceptable that people aren’t able to arrive here unless it’s with their car. 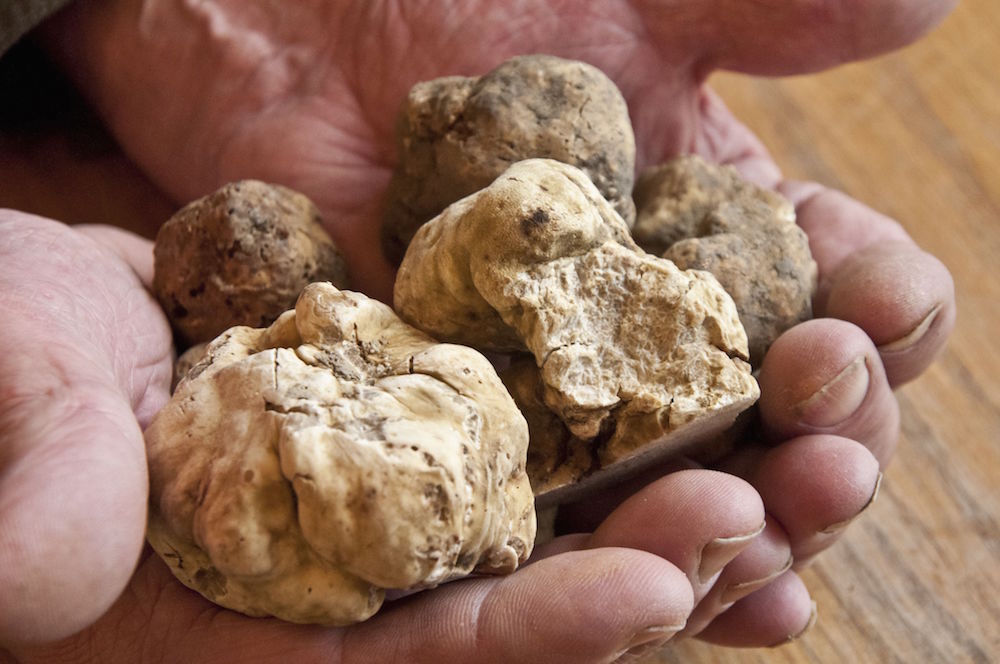 What is the fair’s economic impact?

CIRIO: The Fair’s economic impact is certainly high and lasts throughout the entire year thanks to the image that the autumn event gives to the city.

The tourists arrive in Alba indirectly thanks to the event and it’s impossible to establish exactly what influence it has from an economic point of view.

Much of Alba’s commercial network lives thanks to the takings during the Fair and Christmas, which account for 70% of the total.

This gives us an idea of just how important it is to keep the Fair going because it represents, in all respects, a heritage that cannot be dispersed.

What will the future hold for the event?

CIRIO: I see a great future for the Fair because there will be no crisis: people will continue to want having fun. People loves colors, history and truffles, which have now entered into the collective mythology because they’re expensive, rare and mysterious.

Wine, food and folklore, with the right combination of art and culture, make this event perfect and that’s exactly what we have to aim for.

In the future, we’d like to postpone the period of the event in order to continuously improve the quality of food. Truffles must be found by all those coming to the Fair.

Once it was different, in October it was already cold and the hypogeum fungus (truffle) could mature, while in November it would snow, so people couldn’t move around.

Today it’s different, the climate has changed and the month of November is more touristy and perfect for hosting the Fair.