For us born and raised in Langhe the White Truffle of Alba is the companion of a lifetime.

Every year, autumn after autumn, we have seen the streets of every day filled with all sorts of people, coming here, in our little town of Alba, with that classic enthusiasm that only something as precious as truffles can give.

Mysterious and unobtainable until hidden under the ground, and suddenly almost overbearing on the stalls, with that scent of earthy mushroom surrounded by love and hate.

Although this is the motherland of the most qualitatively recognized truffles in the world, showing up without a minimum of preparation and wanting to buy one at all costs risks turning into a disappointment: a good merchant sells his “goodies” to those who can recognize the value.

Follow us to discover everything you need to know to become aware buyers, or read our Special for the Truffle Fair to find tips & suggestions on every matter! 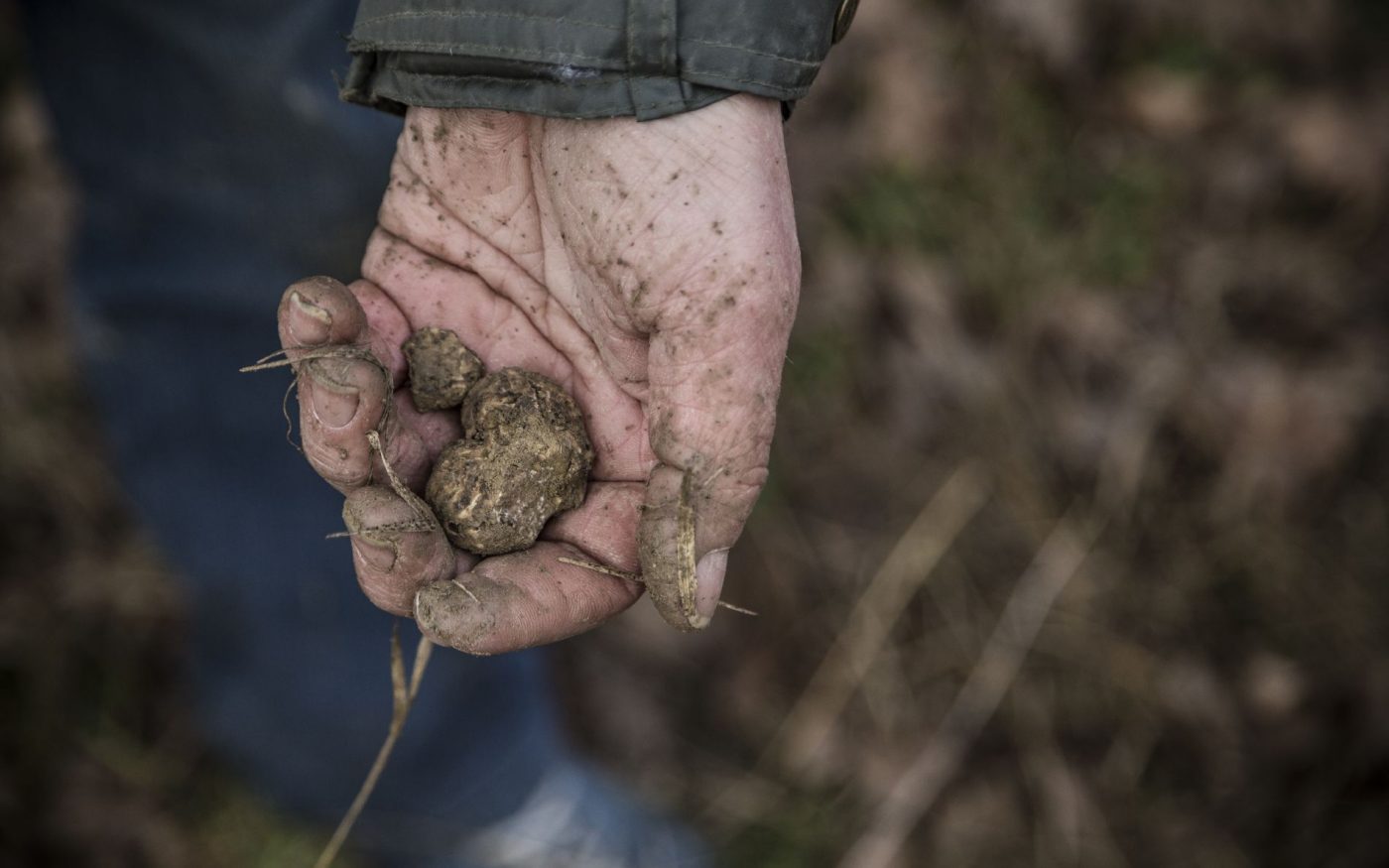 Where does it grow?

The truffle is a hypogean mushroom that grows underground.

The fruit, shaped like a tuber, consists of a fleshy mass, called gleba, covered with a sort of bark called peridium; the characteristics of structure and the color of these parts allow to easily distinguish the various types of truffles.

It is formed in high percentage by water and mineral salts absorbed by the soil through the roots of the tree with which it enters into symbiosis: there’s a special relationship between some types of tree and the fungus, in which the first nourishes and protects the second, creating the perfect habitat for its growth.

The white truffle of Alba takes on different colors depending on the plant with which it lives and develops, varying from white, sometimes with pink veins, to gray tending to brown.

The roots, around which the mycelium finds the conditions to generate the truffle, are mainly those of poplar, linden, oak, willow and, according to some, also vines.

When does it grow?

Alba’s quality white truffle reaches full ripeness around the middle of October, but the search begins on September 21st and lasts until December 31st.

So be wary of those who try to sell it in other periods: outside of those given days the collection (and sale) is strictly prohibited and punished, therefore you’d be dealing with fake and / or illegal truffles.

There are similar varieties in shape and color that can confuse the less experienced, but since this truffle has a very short shelf life, of just a few days, it is impossible to find quality at other times of the year.

The best truffles for quantity and quality are those that ripen in the period of the new moon of November.

So, following the lunar calendar, you know, year on year, which is the best time for truffles. 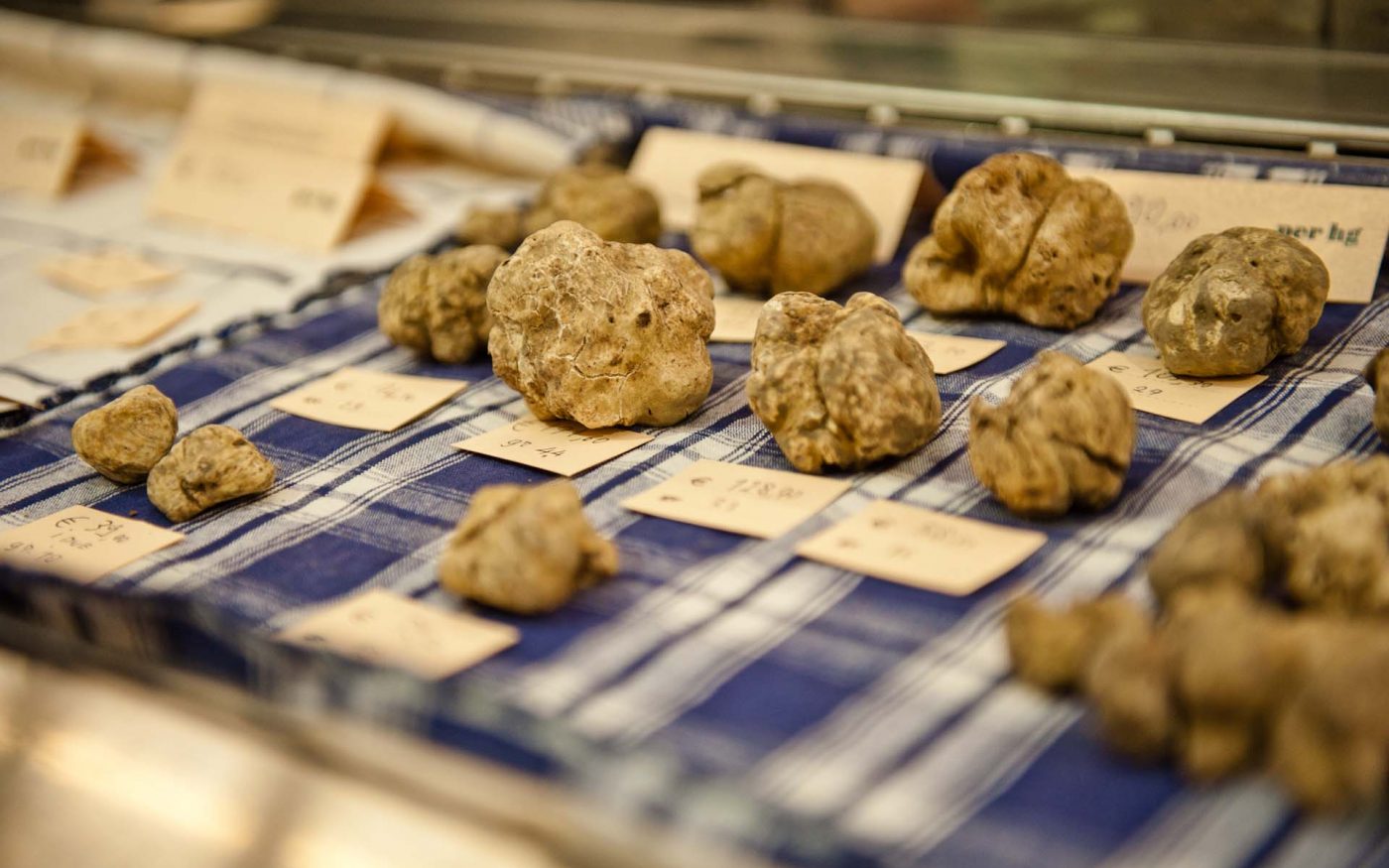 How to choose it?

This is an important aspect, which many ignore.

When you buy a product as expensive as the white truffle, don’t take the first offered by the merchant: look, smell, touch, allow yourself to make a selection and bring home a product that doesn’t disappoint.

The visual analysis starts from the integrity of the truffle: it is not a purely aesthetic matter, because an intact fruit deteriorates less rapidly.

To be evaluated also is the amount of mud that covers it: mind you, the truffle should not be clean, but not entirely covered, since the smell of the mud can mask any unpleasant aromas.

Keep in mind that the purely aesthetic aspect in no way affects the taste: the warty truffles, although more difficult to clean, have nothing to envy to the smooth ones.

This difference in appearance derives exclusively from the soil in which they grew: the characteristic warts are formed when the truffle meets obstacles in growth, such as rocks or roots, and those from the smooth peridium are usually born in sandy and brittle soil. 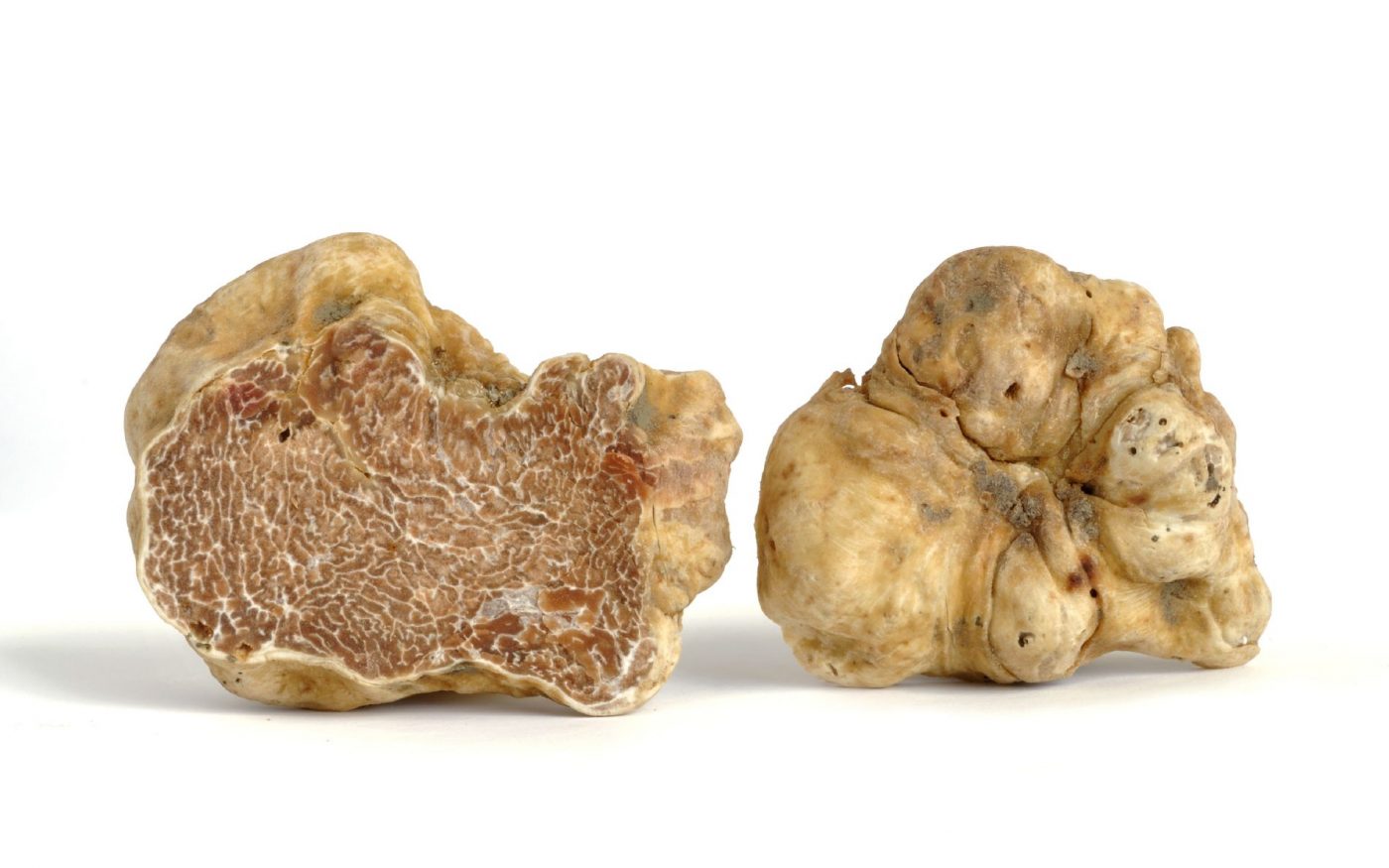 Tactile evaluation consists in the evaluation of consistency: a good truffle must be turgid and compact, slightly elastic.

Do not buy the harder truffle among those on display, and do not be fooled with an excessively elastic one: stay in the middle.

The last phase is the olfactory one: the white truffle has a complex aroma, much richer than that of the other varieties.

It consists of a range of sensations of varying intensity and amplitude, again influenced by the plant in symbiosis: the oak tree bares truffles with a more persistent and longer-lasting aroma, while the linden is more aromatic and clear.

That’s all, you’re ready, get the party started and see you in the market! And if you want some suggestions on use in the kitchen, read our dedicated article!