Looks of the dough

The dough’s color can be straw-colored or dark and opaque ochre, solid, it breaks neatly.

Bra cheese has gotten its name from the town of Bra, that was in the past the biggest center for seasoning and selling this cheese. It was in Bra that, back then, the cheese was born. According to Delforno, the cheese was born very long ago and the old piedmontese cheese-makers don’t remember any other kind of cheese produced in this zone.

Anyway, back then the enterprising cheese-makers of Bra gathered all the products of the zone of Cuneo and of the alpine pasturesin the town of Bra, from where they brought the cheese to the ports of Liguria.

The main ingredient is cow’s half-fat milk, if necessary with oat’s and ovine milk, gathered during one or two daily milkings.

The milk is curdled between 27° and 32° C with liquid rennet. The mixture is then broken in pieces as big as corn grains, gathered in the ” fascere”, if necessary broken again and finally pressed.

The salting can be dry or pickled.

The minimum seasoning lasts 6 months in places in which the temperature is 12-15° C and the cheese is regularly brushed and oiled. 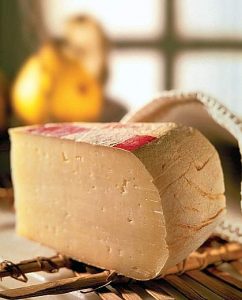 Pleasant and intense forage flavor, together with strong sensations due to the long ripening. The taste is sapid, and produces a pleasant

itch in the mouth. The making of the raw dough and the seasoning make the bitter taste turn pleasantly hazelnut-flavoured. It is solid, on average hard and granular.

How to eat it

At the table, grated or cooking (veal carpaccio with chips of Hard Bra).