Somedody has tried to get me to read it once, but I answered that I didn’t want to see it. I’m not one of those who use the magic book, I want to live peacefully. Nowadays people who have studied say that the masche don’t exist, but if they need it, they’re able to act like them. The more you’ve studied, the better you can use the book. If you don’t know how to handle it, you can get disgraces and problems, and never understand where they come from. It’s a difficult bok, and dangerous. The masche have existed and still do. 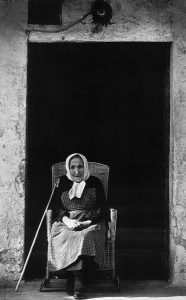 My son was once disturbed by a bird that looked like a cow. He was walking on a street at night and that bird kept flying around him and scaring him. When my son understood that he couldn’t do anything against that bird, he ran home.

What happened to me was even worse. I was coming home from town, it was night; when I arrived near the Chinassa farm, I couldn’t go on. There were deep holes in the ground and plenty of bushes with sharp thorns hurting me. . As soon as I had passed one, there was another and I had to keep getting hurt.

After many hours I realized that I was in the same spot I had started from, and my hands were bleeding from the thorns. I had to wait there till dawn before I could get home. My relatives thought I was drunk, but I knew I was right. I remember it was July, 27th, the day after the Duce had fallen from power. I discovered the truth by hazard. I was working in fixing a drainpipe on the church’s roof and the parish asked me if I had got home without problems the night before. I shouted “Damn you, if I ever catch you I’ll break your bones and show you what you’ll get for bothering people”. I climbed down the roof to beat him, but he ran away; from then on he didn’t disturb me any longer.

The masca we know is 80 years old, and everybody knows she’s a witch. At a certain point, when they get old, the masche try to get rid of their magic book by giving it to somebody. If you want to protect yourself against them you need a book that you can’t buy. Some have tried to get it, but couldn’t. I know how to get rid of a masca, but it’s a secret I can’t tell. To save someone means to let others die, because the bad that you take away from one person has to be transferred to another one. I feel I can fight the magic, but it’s dangerous and I’m scared. I helped an hypnotized child who had an incurable disease. At a certain point I had to stop, because someone was preventing me from doing it. The masche have a kind of club they all belong to; nowadays they have some problems, because they don’t have their books, but you can never be sure. I have a gift, and I can recognize a masca immediately when I see her. Once my wife fell in a wood where we were gathering firewood. She hurt her leg badly, but strangely her socks weren’t torn. The policeman didn’t believe what we said and said that she had fallen under a tractor’s wheel. I knew who had done it and played a trick on him.

After four years a woman came to my house shouting “Gepù, help me because I’m dying”. I gave her some grappa and she felt better. The next day in front of the church she told me “Gepù, you played a trick on me, didn’t you?”. So she revealed herself for what she was, and I told her that if I had known, instead of the grappa I would have given her a couple of shots of my gun. I told her not to pass in front of my house, otherwise she would fall and get hurt. After four years it happened, and the trick worked.