The most widely grown red grape variety in Italy, after the Sangiovese, is the Barbera, that is used “in purity” for the production of its own piedmontese wine.

Originally from the Monferrato area and then into the Langhe hills around Alba (Cuneo), the Barbera is now a wine of prestige thanks to better techniques of vinification and aging that enable it to compete with the greatest red wines. 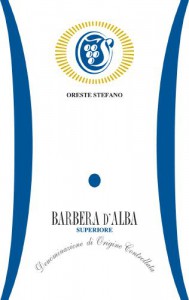 One example is our tasting of today, the Barbera d’Alba Superiore Doc 2010 from Oreste Stefano‘s canteen, a family farm in Monforte d’Alba (Cuneo).

The aging in French oak barrels for twelve months, allows the Barbera to have a good general structure and longevity, thanks to the presence of tannins which lowers the general acidity level (characteristic of the vine).

Very intense ruby red in color tending to purple with a full-bodied appearance with the “archs”, clearly visible in the glass.

Ethereal scents and full of aromas, clean, it recalls the red fruits such as blackberries and currants as well as the pleasant scents of spices such as cocoa, cinnamon and green pepper.

The flavor is full-bodied, fruity and pleasantly bitter at the end with light herbaceous hints.

The tannins and acidity are well balanced, allowing a good digestibility. Long persistence in the mouth.

According to its structure we combine it to strong and tasty flavors as roasted and braised red meat, as well as boiled meat and stews in general or pasta dishes, fresh ravioli as traditional Piedmontese Plin, agnolotti and tajarin with tasty sauces (ragù and fondue). Great if accompanied by cold cuts and well aged or spicy cheese like a good castelmagno or raschera.

But before sitting at the table, let’s decantate our Barbera for about an hour before the tasting at a middle temperature of 18 °.