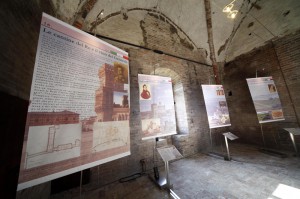 Grapevine and wine have always been synonyms of Italy. Even the name Italia finds its origin from wine. The ancient Greeks tell Italo was king of the Enotrians and was the first to teach his people how to grow vines and make wine. Since then the Enotrians left off their roaming and chose a fertile land where to settle and live on their work.

Not only by chance the history of Italian wine in the XIX century seemed to share the Nation history: from the very beginning when the many vineyards spread all over the Peninsula were unable to produce good wine up to the end when the Unity of the Nation was fulfilled together with the Risorgimento of Italian wines.

The exhibition has three sections:

carrying out by: a.p.s. Ambiente & Cultura

project with the contribution of Comitato Adele Alfieri di Sostegno