We’ve almost reached the end of our trip. After our Savoy visits, at the Royal residence and the Count Camillo estate, today we move one hill over, towards the famous Fontanafredda estate, one of the largest producers of Barolo.

They began planting vineyards in 1864-5 and producing Barolo around 1870 in the Fontanafredda estate in Serralunga d’Alba.

It was administered as part of the King Vittorio Emaule II assest until 1878.  As of this date, and under the brand name “Casa Vinicola E. Mirafiore”, it increased its  production and commercial activities greatly.

In fact by the end of the 1800s Fontanafredda became the largest producer of Barolo.

The owner, Count Emanuele Mirafiore, has the indisputable merit of promoting this wine in foreign markets.

Quite a bit! At least as far as the buildings are concerned.

The comparison with an early twentieth century  lithograph is incredible.

A century has gone by but the royal villa, the Gallaretto and Rosa farmsteads, the weigh station, the stables, the nursery school and the recreational area are still in place.

The two long yellow/orange striped houses were made by an anonymous master mason from Diano. Their cellars, which were used for crushing the first Nebbiolo grapes, still exist and, up until 1990, contained the old oak barrels that were used for the initial winemaking.

The barrels came from Marchetti di Bra and were brought to Fontanafredda around 1888; today we can still see two remainders alongside the new French oak barrels from Limousin. The original bronze doors are simply stunning.

“The King’s wine cellar” is still in place, however the century-old barrels, which are authentic archeological jewels of nineteenth century wine-making, are no longer utilized. Restoration work is currently under way to enhance the masonry.

This magnificent cellar, with its elliptical vaults and exposed brick surface, depicts a perfect geometrical structure.

There is practically no seasonal temperature fluctation within these walls.

The Mirafiore sphere, with its truncated cone-shaped chestnut vats, still exists in the lower wine cellars of the Fontafredda estate. There are four left but are no longer being used. 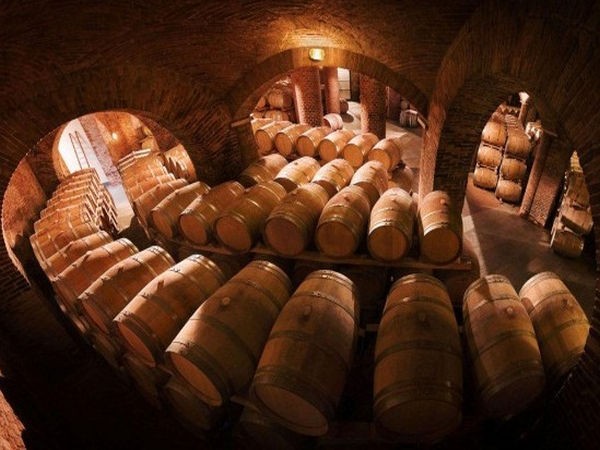 a pantheon of wine, the vats at the top are covered with canvases for retaining the carbon dioxide.

An early twentieth century lithograph further highlights this cellar, originally used for making wine from Nebbiolo grapes in the lower part whereas the upper part was used for the bottling process.

You can still see the holes in the vaults where the Nebbiolo grapes were inserted.

Around 1925 the upper part of the cellar was demolished and was later adapted solely as a cellar for wine conservation. Restoration work carried out in the 80s gave the Mirafiore sphere a promotional function. Singers Paolo Conte and Katia Ricciarelli sang here.

And we can still see the original Borsari Zollikon concrete barrels, one of the first facilities in Italy that used reinforced concrete for storing wine. Here too the Barolo wine was made and stored as from 1887, the year they were implemented, as can be seen by a historical plaque.

The concrete barrels were considered authentic examples of nineteenth-century innovation as reported by some authors including Carpenè.

They are still functional and with excellent results. In 1978 conservative restoration work was carried out; the original colors were maintained as were the doors and fittings.

In the 90s the internal tiles made with enological lining glass were replaced with resins because the original material could not be found.

An anecdote, that is still remembered by the old winemakers, tells the story of a lunch inside the large, 1,200 kegs tank that took place in the 30s, when the protective enological glass tiles were replaced.

As mentioned, we are almost at the end of our search for the Barolo wine origins. The next appointment will take us to the last two stages of our journey. The first will be in Alba, the “capital”. The other stop will no doubt be a rather unexpected surprise… :-)