Last week, we had a look at some of Barolo’s oldest wine cellars, in order to find any traces left behind by the homonymous great wine, but pehaps we didn’t get all the answers we were looking for.

Today we’ll try to broaden our search by moving on to Pollenzo and then Grinzane Cavour, home to the famous castle.

Pollenzo and the Savoy

The Pollenzo royal estate possessed large wine cellars which, during last century, made wine from vineyards owned by the Savoy Royal House, including the Barolo royal vineyard, located in the town of Paiagallo.

The state of Turin documents – Royal House Fund, often mention the royal wine cellars in Pollenzo where the wine bottling also took place; this was an important innovation for the period in question (1848-1873).

The winery itself was placed on the north-east side, in a room just slightly underground about 1,700 meters in size, and you can still see some stands that supported the barrels.

Unfortunately there is nothing else left. After 1946, following the fall of the monarchy, the entire administration was passed on to the state and all the rooms gradually declined and were further damaged by the 1994 flood.

Today the building houses the Agenzia di Pollenzo and its University of Gusto (Taste).

In Grinzane with Count Camillo Benso 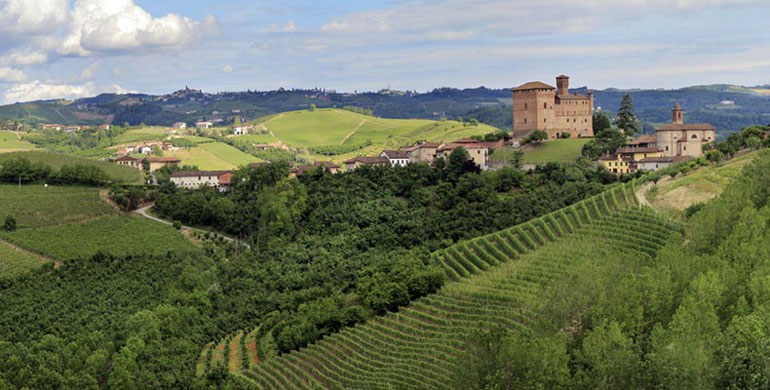 Camillo Benso, Count of Cavour and Prime Minister of Vittorio Emanuele II, produced Barolo wine between 1835-1855 in his estate at Grinzane Cavour, not far from the town of Alba.

The French oenologist Oudart worked here and made Barolo wine according to a special technique that certainly influenced the subsequent production of this wine.

Oudart insisted on producing dry wines, or rather wines that  completed the fermentation phase, and gave great importance to racking; but in doing so went against the methods being used at that time.

Today the castle is the seat of the Cavour regional wine shop; nothing remains of the wine cellars located in the “room of graces” behind the castle “with 26 barrels and 44 kegs”.

In 1961 the massive restoration work that took place to create the Piedmontese regional wine shop, significantly altered the internal structures.

The numerous farmsteads owned by the Cavour family however are still up and running. Some of the old winemakers from Grinzane Cavour still remember the names of the farmsteads: “La Camilla”, “La Corte”, “La Borzone Grosso”, “La Gustava”, which were attributable to names of famous local people during the Cavour era.

These farmsteads are well highlighted on a map dated 1700 which is preserved in the municipality of Grinzane Cavour.

That’s it for today. Our next meeting will take place in one of the biggest and historic wine cellars in this area… don’t miss it!