If you’re a wine enthusiast and you find yourself in the Langa region, you absolutely must visit ‘La Bottega del Vino’ in Dogliani.

Its location is found in the underground cellars of the former convent of the Carmelites built in the sixteenth century, under the Town Hall and alongside the Church of the Saints Quirico and Paul.

The underground site is quite impressive; the walls and vaults with exposed bricks create a cozy and welcoming atmosphere, a symbol of the tradition and history of this wine.

The first historical document that verifies the existence of the Dolcetto wine dates back to 1593; an ordinance issued by the Municipality of Dogliani in August 1593, which governed the collection of grapes to prevent any errors regarding an early harvest .

The phrase “Niuno ardischi vendemmiar le uve avanti al dì di San Matteo” meant that it was in fact absolutely prohibited to remove the grapes from the vines that had not yet come to their full ripening. The offenders would be severely punished via the confiscation of the entire crop!

In 2012, the “Bottega del vino Dogliani” also becomes part of the consortium of producers so as to get better promotion of the new denomination: Dogliani DOCG.

The difference between the two classifications represents an attempt to give greater recognition to a wine that is often underestimated in the national and international wine panorama, but which has proven to be of great potential.

A journey into the Dolcetto di Dogliani 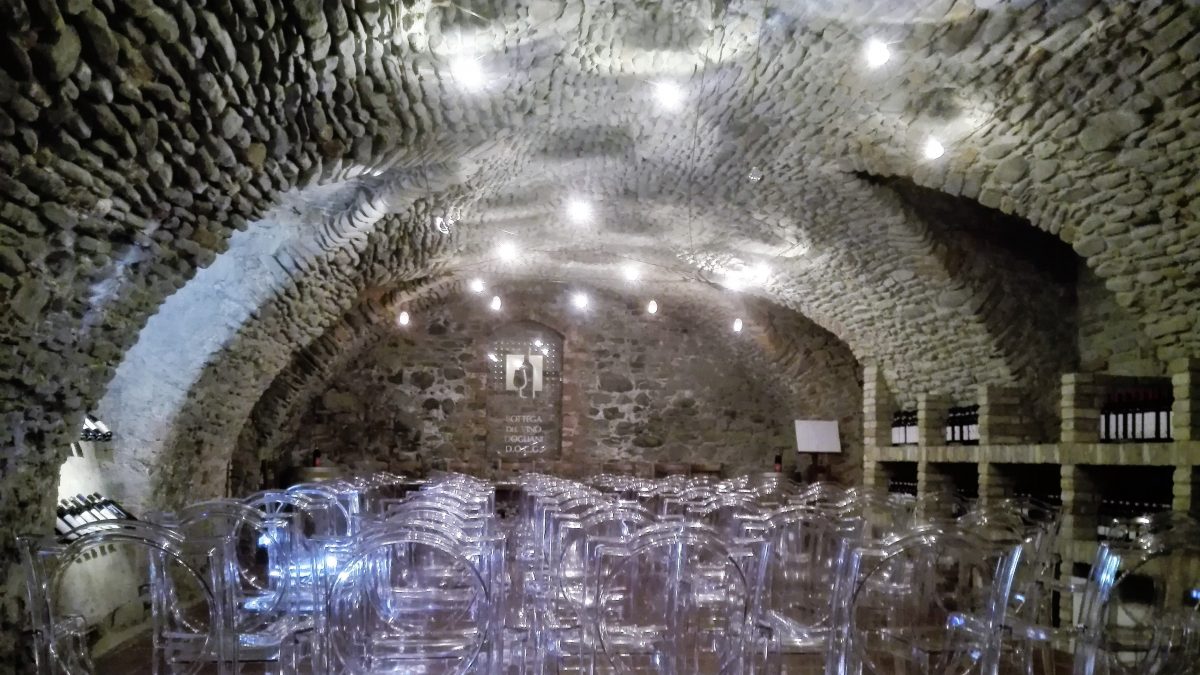 A visit to the Bottega allows you to take a trip amongst the hills of Dogliani and the surrounding towns where this Doc classification wine is grown. There is, in fact, a variety of over 40 Dolcetto producers, each with their own characteristics and peculiarities.

Along with the most renowned producers, who over the years have also gained a place in the international market, we can find smaller and lesser known wineries in the traditional sales channels.

Often, however, these wineries can be quite surprising when it comes to the quality of their production. Among these, we suggest visiting:

This is a historic winery in Dogliani where the Abbona family began producing wine as early as the late 19th century. Cà Neuva today is a typical Langa farmstead that produces wines that are representative of the territory: Barolo, Dolcetto, Nebbiolo, Barbera e Arneis.

The Sciolla family winery is unique in the type of visit that it offers: the company’s wine tasting tour with wine made from Dolcetto grapes, both pure and mixed with merlot grapes, exclusive culinary delicacies and a private visit to one of the the most important Gothic treasures in Piedmont.

The ideal opportunity to do some shopping

Often those who try the Dolcetto di Dogliani are quite impressed by the quality/price ratio for a wine made with the same care and attention reserved for the more famous vines, such as Barbera d’Alba or the Nebbiolo, which however has a lower price.

La Bottega allows you to buy bottles at cellar prices but with the choice of a wine shop. Obviously the visit to the winery is still the best way to get to know a producer, but often one doesn’t have the time to visit them all!

Furthermore at La Bottega one can purchase even just a few bottles, perhaps from various producers and get an idea of which of the wineries might be more interesting.

Usually La Bottega is open on Fridays and Saturdays, however during the months of September and October it is open every day.

Before coming out, we suggest consulting the site to check the opening hours or to book a visit.