Around 1649, Catalano Alfieri gave the order to begin building the present castle downstream, where the previous medieval fortress built in 996 stood.

It would appear that the architect was Amedeo di Castellamonte, the same who in 1658 created the facade of the Palazzo Reale in Turin.

The building is square and massive, with two cylindrical towers. The building’s front door is in baroque style and shows jambs and architraves made of sandstone.

The deeply carved tiles are also typically baroque. Here you’ll find the Alfieri coat of arms, a black eagle which has always been the symbol of imperial power.

The first object of art that greets the visitor is the bust of Carlo Emanuele Alfieri, surrounded by a magnificent frame and placed in an oval niche at the top of the first flight of this imposing grand staircase.

To the right and left you’ll find war trophies and laurel branches, two eagles and acanthus decorations, probably the work of plasterers from Lugano, as are the decorations on the ceiling and walls.

The rooms open to the right and to left of the staircase. 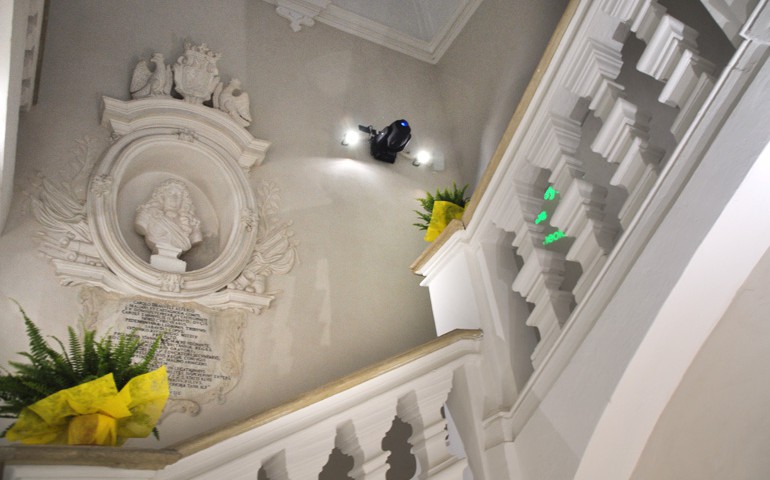 The grand staircase and bust of Carlo Emanuele Alfieri

The coat of arms hall

The coats of arms hall is located in the castle’s central tower. Its stucco decoration in high relief, a typically Baroque style, represents the coat of arms of the Alfieri and related descendents. Note the continuity with the decorations present next to the grand staircase, accompanied by a series of windows painted in “trompe l’oeil” style.

The lineage eagle is found at the four corners with the mottos “Tort ne dure” (the offense will not last) and “Hostili tincta cruore” (wet with the enemy’s blood). The Alfieri from Magliano coat of arms is at the center of the pavilion vault.

Some interesting info:  the poet and dramatist Vittorio Alfieri lived in the castle as a child and, as an adult, often quoted the manor house in his letters.

In writing “Saul“, he was inspired by a painting which has gone missing: “Cleopatra bitten by a poisonous snake.” Today it is argued that this painting was present in one of the castle’s halls and may still well be in the castle hidden in a secret room.

Memories, Hills, Rivers, Stones, Consciousness: these are some of the thematic areas around which the Landscape Museum was developed; newly established, it is hosted within the halls of the Castle, on the noble floor.

The studies and research by Antonio Adriano (1944-2006), from Magliano, along with modern technology, has enabled the creation of the museum’s itinerary and allows visitors to immerse themselves in the Langhe and Roero environment and territory.

The collection of objects, documents and testimonies tell the story of the territory between the past and present through interactive multimedia instruments.

A landscape that has changed over time and where the work of man has taken a leading role in making it “harmonious and natural”, as it appears today: a theater where the actors are the farmers, with their life stories. 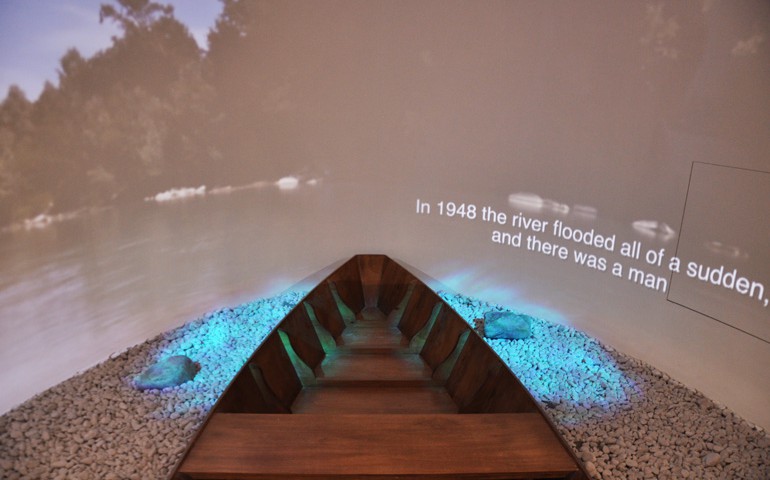 One of the installations at the Landscape Museum

The Museum of plaster ceilings, inaugurated in the 90s, thanks to the work of Antonio Adriano, is constantly updated.

It documents a particular construction technique for creating special decorative plaster panels, placed on the ceilings of farmhouses in some towns in the Roero, Asti and Ovada areas.

The itinerary winds through the rooms rich with many artifacts and information including chalk mining, processing, applying the panels and the total abandonment of this ancient technique in favor of large-scale production of bricks. 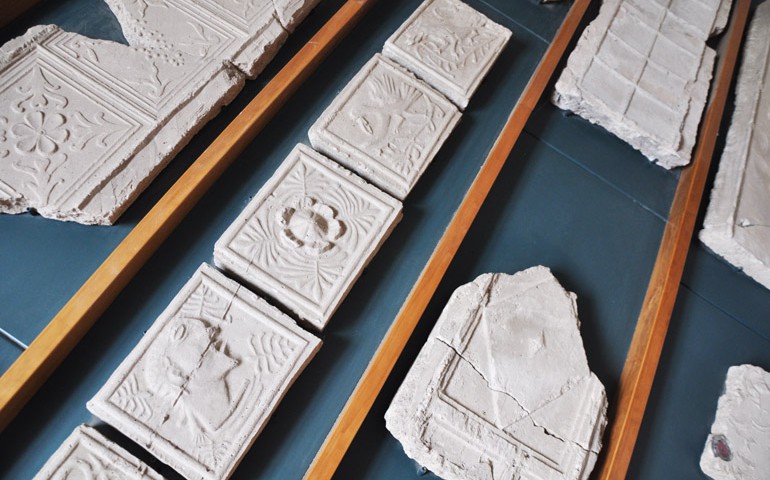 Some details found inside the Plaster Ceilings Museum

Upon leaving the Castle, we recommend visiting the Alfieri chapel, located on the north side of the palazzo, which has both an external and internal entrance.

It was built in the second half of the 18th century in “baroque” style, and was dedicated to the Holy Crucifix. It is also remembered as the Oratory of the Holy Shroud.

Here, the mother of Vittorio Alfieri, who used to love spending her summers in the castle, requested and obtained to hold Mass Today the chapel is once again deconsecrated.

The entrance fee includes a visit to the:
The Plaster Ceilings Museum
The Langhe and Roero Landscapes Museum
The 18th century Alfieri Chapel

The historic center of Magliano is lying on the top of the hill and is characterized by the imposing eighteenth-century castle that belonged to the Alfieri.