Romano Levi was born on the 24th of November 1928 in Campodolcino in Val Chiavenna (Sondrio). With reference to his origins Romano recollects:

During the winter the ‘grapat’, grappa makers, came from the Chiavenna Valley, north of Lake Como, and descended onto the plains all the way to Liguria. They were men who lived in the mountains with animals in the summer. In the winter, once the animals were in their stables, they had to find another job, often creating it or inventing it from nothing. These ‘grapat’ had learned the craft of distilling the vinasse from the squeezed grapes of the neighboring Valtellina. My father Serafino, like five of his nine brothers, was one of them. He came to these parts (Neive a/n) and opened a distillery in 1925. However, in 1933 he died. Thus, the distillery was passed on to my mother. She too did not live long after and died in 1945 in a bombing. I was 16 years old and I had to take control of the situation. Until that moment I had only seen work superficially, without actually knowing the fatigue that goes along with hard work. I started off by thinking, well it’s only going to be a temporary thing.

Go to our online shop catalog, you’ll find a private collection of 34 grappas on sale belonging to Romano Levi, prior to May 1st 2008. Photos and detailed information >>>

His father died when he was 5 years old and at the age of 17, following his mother’s death, he began distilling with the help of her sister Lidia. This would end up being his work for the rest of his life.

Over the years he never changed the artisan distillation plant and used a discontinuous alembic system over direct heat, which allows the distillation of only small quantities of the product.

The bottle labels were designed and handmade by Romano, and often recounted poetic tales or were special dedications; the most famous of his subjects was that of the wild woman. 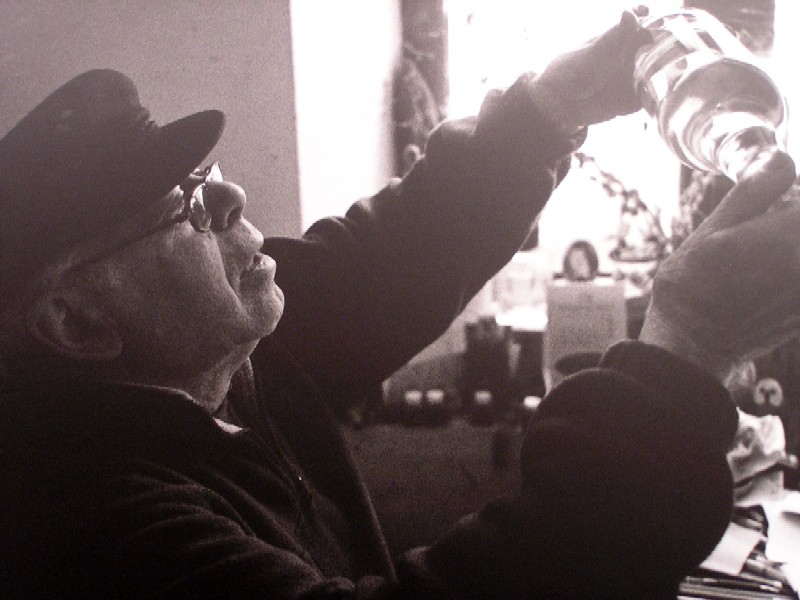 As a child I used to walk to school, crossing the hills and vineyards. Among the vineyard rows you would often find the ciabot, which were tiny equipped shelters where the wine-makers and farmers took refuge in case a storm surprised them in the evening or in the morning if they had to be in the vineyard before sunrise. I used to pass by there in the morning and I would sometimes see beautiful scruffy-looking women come out of these shelters; women who appeared to be a bit crazy, lonely and often living on the margins of society. They were mysterious, without constraints. They disappeared and then came back, they were both partly witches and partly fairies. They were free, as all women should be, to live the best part of their life. 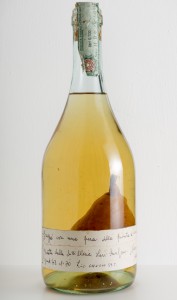 Romano Levi became famous in the seventies through the gastronome Luigi Veronelli, who defined him as being the Angelic Grappa Maker in the magazine Epoca; the definition of angelic was also inspired by the name Serafino Levi, Romano’s father, which remained the company’s name.

His grappas were considered to be rough, blunt, strongly anchored to tradition, without sweeteners and without any concessions to the softness of the “modernist” grappas.

His art as a distiller was also appreciated by many famous enthusiasts such as the former German Chancellor Helmut Kohl, Cesare Romiti, Marcello Mastroianni, Antonello Venditti, Andrea Bocelli, Roby Facchinetti, Bruno Lauzi, Tino Buazzelli, Nicola Arigliano and many others.

Romano Levi designed the last label on the evening of 1 May 2008.

The distillery was his life. He never traveled and never saw the world; it was the world that went to him. Many pages have been written, and many people have spoken, about him and his labels.