He was born in Magliano Alfieri (S. Antonio) in 1944, to a farming family. He lived his entire brief life in the beautiful ancestral home built by his grandfather a century ago, from whom he took his name.

Taking his secondary school diploma from the Civico Istituto Magistrale “Elvio Pertinace” of Alba, he went on to study teaching and education at the University of Turin, without however taking the degree. During his university years he worked as an assistant at the Agrarian School of Cravanzana.

And then the turn: he came home to become a farmer in Magliano Alfieri. He began, following the example of Pinot Gallizio, some initial experimental excavations, recuperating old rural houses, fallen down plaster ceilings, old doors and banisters, that would later become the principle collection of a museum established in the restored castle of Magliano.

He founded the “Gruppo spontaneo di Magliano Alfieri” [Spontaneous Group of Magliano Alfieri], which was committed to the recovery of the oral tradition, above all relative to the songs of alms, propitiators, and of thanks that marked farm life over the centuries.

The group was not limited to the simple work of recuperating cultural traces, but aimed to bring folklore to life: and so one has returned to “Sing the Eggs”, the ancient carnival has been returned to life, townspeople gather in the piazzas for the “Cantè Magg” [Song of May], the “Magninà”.

In July, 1971 he began an ethnological-ethnographic and archaeological collaboration with the biweekly “La Bilancia” and the “Truffle Festival” of Alba. He proposed for the first time the recuperation of the castle; the group cut the the first disks and cassettes, participating in conferences and folk festivals, at the national and international level. 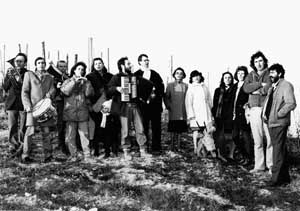 In 1972 he was among those who signed in favor of the founding of a section of “Italia Nostra” [Our Italy] in Alba: for years Antonio would be its Vice President.

Charismatic, inspiring, and a man of great culture, Antonio became firmly established, from 1970s, through his collaboration with the regional magazine “Verde” and the “Gruppo” constituted the epicenter of research coordinated by Prof. Morteo of the University of Turin, published by the Region of Piedmont for the “L’Arciere” of Cuneo with the title “Spettacolo e spettacolarità tra Langhe e Roero” [“Spectacle and Spectacularity between Langhe and Roero”] (1981). He made an extremely important contribution to “Documenti uno” (1974), a publication commissioned by the interregional council of Italia Nostra.

And then the creation of the plaster cast museum, which opened in the 1990s and continues to grow still today. He continued to gather material in his house-museum, with dozens of collaborators in the field of ethnology-ethnography, a field in which he was one of the greatest experts, worldwide.

In July 2006, death overcame him, still full of dreams and projects, like an adolescent.